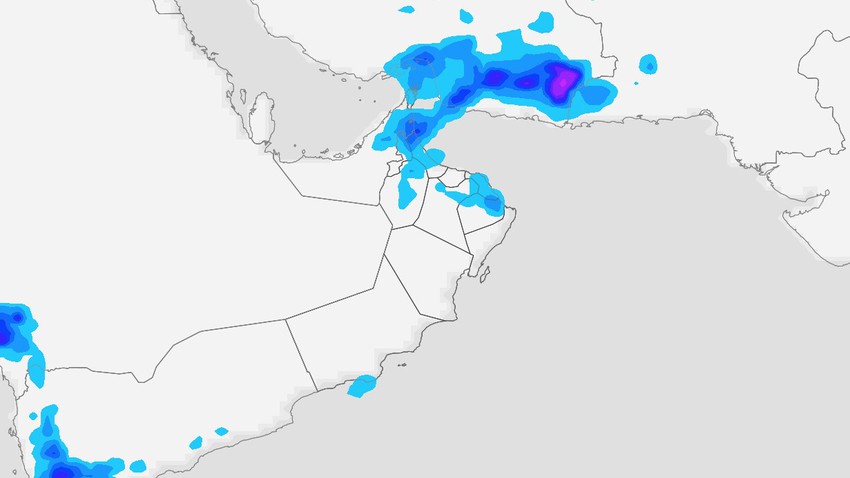 Arab Weather - The temperatures are much lower than their normal rates relative to this time of the year much on Tuesday, and the weather is warm to relatively hot in the coastal areas and the Hajar Mountains, and hot in the rest of the regions, and quantities of clouds appear at different heights, interspersed with thunderstorm clouds of character Random, so that thunderstorms of rain fall on random areas concentrated on the Al Hajar Mountains and the coasts of Dhofar Governorate, and the rains are of varying intensity and sometimes abundant, causing valleys to run and form torrents, especially in the Hajar Mountains due to the geographical nature that characterizes these areas, and the winds are northeasterly moderate in speed It is active sometimes on the coasts of the Sea of Oman, and it is moderately southerly, for speed activities in the rest of the areas, and it raises dust and dust.

The weather is also moderate during night hours over the Hajar Mountains and the coasts of Dhofar Governorate, and warm in the rest of the regions, and the opportunity remains weakly prepared for limited showers of rain in some areas, with a significant rise in humidity levels, and low clouds that touch the surface of the earth work on Fog has formed in some areas of the mountainous heights overlooking the Arabian Sea, causing a decrease in the horizontal visibility, and the winds are southerly moderate, active sometimes in some areas.

Urgent: The Denmark-Finland match was postponed after Eriksen suddenly fell unconscious during the match