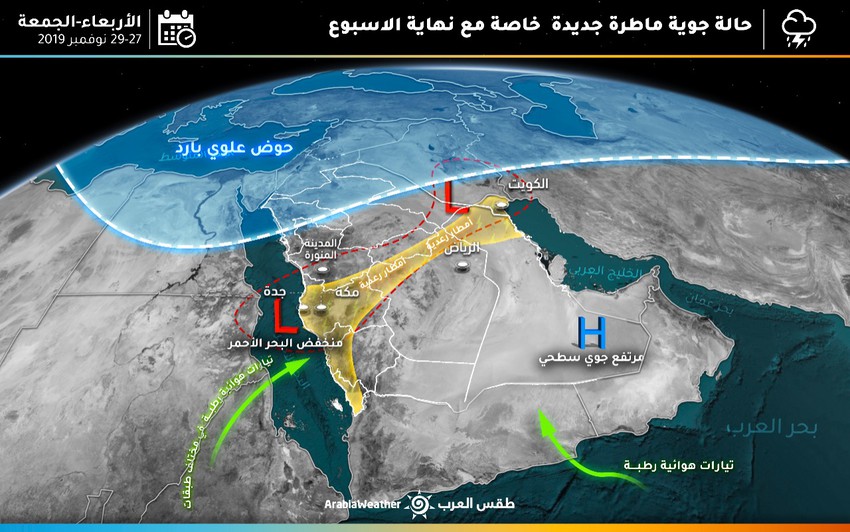 On probation .. a new rainy weather during the second half of the week

Arab Weather - Eng. Saudi Arabia, parts of Iraq and Kuwait are expected to be affected by a new rainy weather starting Tuesday evening on the southwest, far north and northwest of Saudi Arabia, with rain clouds extending on Wednesday and over the weekend to cover central and northeast Saudi Arabia as well as parts of Kuwait and Iraq.

It starts Tuesday evening and expands with the weekend

On Wednesday and Thursday, the area of rain extends, including parts of Medina, Qassim, north and west of the Riyadh region and reach Hafr al-Batin and north-east such as Khafji, parts of Kuwait and Iraq, while the chances of rain to retreat from the north and northwest of Saudi Arabia.

The rainy situation is accompanied by sporadic showers of rain, sometimes thunderstorm, which form floods and watersheds in some areas, which may include parts of Jeddah, Makkah and Taif.

Heavy showers of papyri are likely to fall south-east of Medina, north and northwest of Riyadh, parts of Qassim, Hafr Al-Batin and interior parts of the north-east.

This unstable weather comes on the back of the anticipation of a cold upper basin from the north, accompanied by an effective response to the Red Sea depression (for the first time this season) and its expansion to central and eastern Saudi Arabia and neighboring countries,

This means that thunderstorms and rain showers of varying severity are associated in some areas with the fall of papyri and form water bodies.

Update 6:30 pm | The cold block is deepening and the temperature is below zero Celsius tonight in these areas

Strong winds and dust on the northern region on Friday

UAE Meteorological Center: detected a tremor a little while ago near Riyadh, with a magnitude of 4 (details)