On the illustrative map, an eastern wave crosses the region, bringing rains of varying intensity to most regions of the Sultanate of Oman 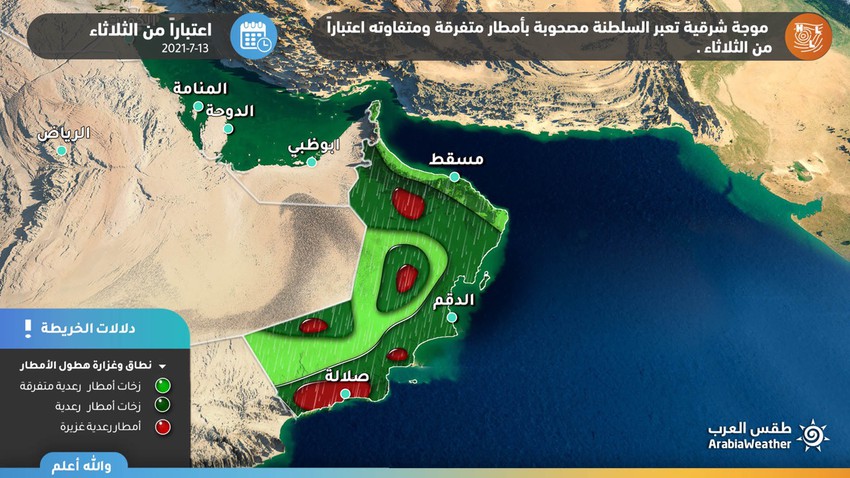 Weather of Arabia - It is expected that an upper wave will rush towards the southern parts of the Arabian Peninsula, coinciding with the deepening of the air-thermal depression located in the southeast of the Kingdom of Saudi Arabia, to deviate the tropical separator line over southern Arabia remarkably, pushing with it large amounts of tropical moisture on the various layers of the atmosphere, Which leads to the emergence of a state of atmospheric instability accompanied by thunderstorms in many areas, God willing.

In the details, it is expected that unstable weather conditions will arise in the Sultanate as of Tuesday as the beginning of the rainy state. Cumulus rainy clouds include most parts of the Hajar Mountains and extend to neighboring areas from time to time and some desert areas, as rain is expected to cover large parts of the central, Al Dakhiliyah and North Al Sharqiyah governorates, in addition To the increase in the intensity of the activity of the autumn of Dhofar on the governorate of Dhofar and the city of Salalah. 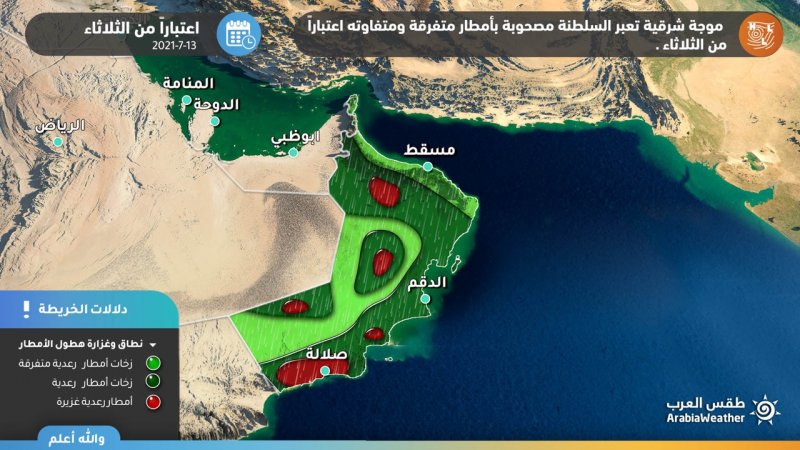 During the weekend, the air activity intensifies to include many regions of the Sultanate, including the coastal areas overlooking the Arabian Sea. These rains are generally of varying intensity with their intensity at times, accompanied by showers of cold, and the activity of surface winds that raise dust and dust in some areas. In addition to a major disturbance in the coastal areas bordering the Arabian Sea.

The reason for the formation of the situation is also due to the rush of an eastern wave towards the region, which means the movement of winds in the high layers from the eastern side to the west, accompanied by the presence of large amounts of moisture and high heat load in the various active layers of the atmosphere, coinciding with the deepening of the atmospheric thermal depression located in the southeast of the Kingdom. Saudi Arabia, which significantly deviates the orbital separator line over southern Arabia. 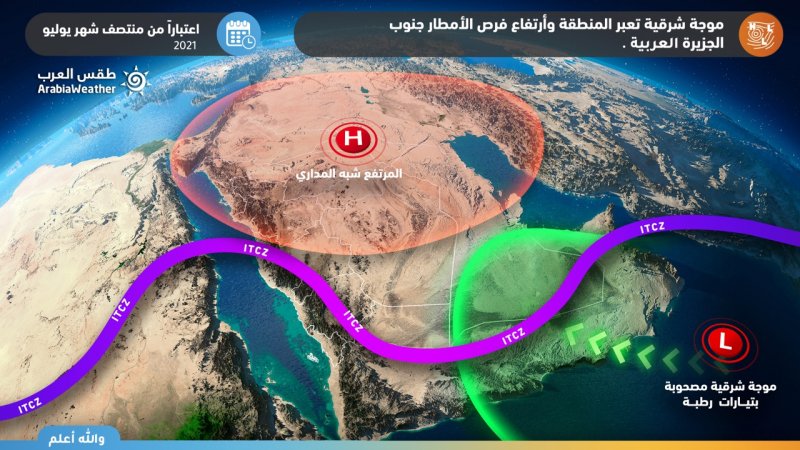 It is worth noting that during the summer in the northern hemisphere the trade winds move northward and take a zigzag path, carrying with them large amounts of moisture from the tropics, towards areas with average solar radiation in large values, which creates a fertile area for the formation of cumulus clouds that cause For thunderstorms, or what is locally called monsoon rains.

The Arab weather shows that these areas do not receive rain frequently in this period of the year, but at the same time, these rains are not considered rare, but rather occurred in some previous years.

Sultanate of Oman: Clear weather in general on Tuesday, and heavy fog is expected late at night in some areas