On the Red Sea coast, Egypt expands the cultivation of `blue carbon` Weather of Arabia - With Egypt approaching hosting the "COP27" climate conference scheduled for this month in Sharm El-Sheikh, the country is heading to expand the cultivation of mangroves on the coasts of the Red Sea.

The mangrove plant is characterized by its great ability to absorb carbon dioxide, as well as being an important and cheap way to protect beaches instead of building wave breaks, in addition to the possibility of exploiting the areas where mangroves grow to reap other economic benefits for the country.

Sayed Khalifa, head of the Agricultural Syndicate in Egypt and supervisor of the national project for the spread of mangrove forests in the country, confirms the existence of two types of this plant, the first is called Shura or Crimea and its scientific name is “Avicenna Marina”, spread in the Arab Gulf countries and on the Red Sea coast, and the second type is The jellyfish, whose scientific name is Risphora macaronata, is widely distributed in Egypt and Sudan.

Sayed Khalifa, in his speech to "Sky News Arabia", explained, "This plant is considered a treasure, because it grows in salty water, such as the Red Sea water, in which the salinity rate is about 40 percent, and it is expected that this plant will have a future role in transmitting genes that can Through it, field crops can withstand salinity, and it can protect the beaches, as it acts as a defensive barrier during the tidal processes in the sea, and thus protects the coasts of the Red Sea from erosion.” 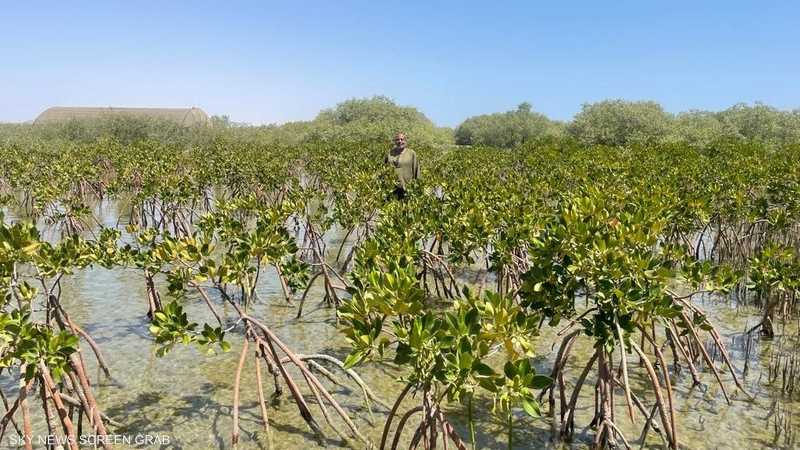 Why is mangrove called blue carbon?

The supervisor of the national project for the spread of mangrove forests in Egypt, explains that: “Studies indicate that mangroves can absorb greenhouse gases, such as carbon dioxide, by 4 times more than tropical forests, and it is called blue carbon, because of the spread of this plant on the sea coast, and the latest studies It confirms the decrease in the thermal emissions rate in Malaysia in general by 1 percent as a result of the expansion of mangrove forest cultivation, which reveals its great importance for protection from climate change.” The use of mangrove forests for beekeeping

The head of the Egyptian Agricultural Syndicate continues by saying: "This plant blooms in Egypt all year round, and we carry out some economic activities on the mangrove forests, such as raising honey bees, as one of the small projects for the local population, in order to protect the plant from deterioration, and thus the local people close to the mangrove forest realize its importance and protect them from camel grazing operations that harm these forests.”

According to the head of the Agricultural Syndicate, since 2017, Egypt has been rehabilitating the areas where the mangrove plant grows naturally, as well as planting new areas with this plant, indicating that the satellite images confirm the improvement of the state of the mangrove forests in Egypt along the Red Sea for five years. The mangrove is the incubating environment for species of crustacean fish

Sayed Khalifa also pointed out that the total areas of mangroves that grow naturally on the Red Sea coast, or in the Gulf of Aqaba, and the Ras Muhammad Protectorate in South Sinai are estimated at about 1,150 acres, but after the government’s support through government funding provided by the Academy of Scientific Research and Technology, in cooperation with The Desert Research Center, the Red Sea Governorate, and the South Sinai Governorate, we have succeeded in expanding by planting 600 new acres, as well as rehabilitating degraded areas.”

Egypt | Cold weather and strong winds, with showers of rain in some northern areas during the coming days