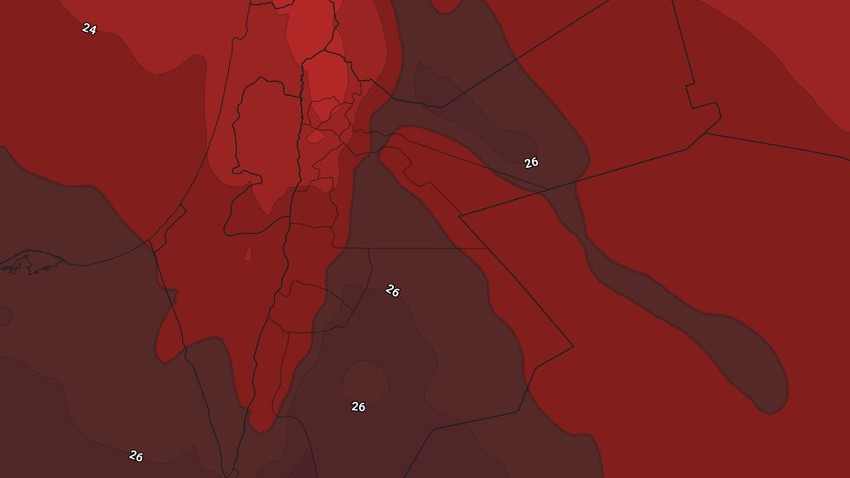 Arab Weather - There is a further decrease in temperatures on Friday to become around their normal rates for this time of the year, and the weather will be moderate spring in all regions of Palestine, and warm to relatively hot in the southern regions, the valleys and the Dead Sea, with the appearance of some clouds at high altitudes, The winds will be light to moderate westerly, and are active occasionally in some areas during the afternoon hours.

Also, there is an additional decrease in the night temperatures, and the weather is pleasant in the early hours of the night and refreshing, tends to be cold in the late hours of the night, and this coincides with an increase in humidity and clarity of the atmosphere, which will work to form fog in large areas of the coasts of Palestine and warn of the low range Horizontal visibility, and winds are changeful and slow.

Palestine is affected on Saturday by a relatively hot air mass that will develop to hot early next week, so there is an increase in temperatures on Saturday to become higher than their normal rates for this time of the year, and the weather turns to be moderate in the coasts of the Mediterranean, and relatively hot in the rest of the regions, and hot In the southern regions, the Jordan Valley, and the Dead Sea, and the weather is clear in general, and the winds are westerly to northwest, light to moderate speed, sometimes active in some areas during afternoon hours.

And there is a significant rise in night temperatures on the night of Saturday / Sunday, and the weather is warmer than usual in all regions, and the winds will be from east to southeasterly, light to moderate speed.