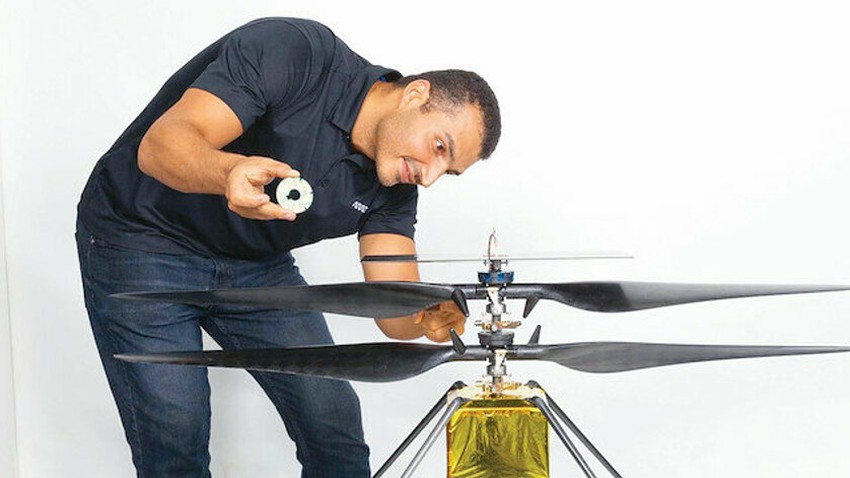 ArabiaWeather - The British Middle East Monitor website published a report about the story of the Palestinian electrical engineer from Gaza, Louay Al-Basyouni, who works for the American Space Agency "NASA", and who was part of the NASA team that sent the "Perseverance" spacecraft. ) To Mars recently, carrying the "Ingenuity" helicopter, where the space agency wanted to achieve a historic achievement through the first human attempt to control a plane flying over another planet.

The story of the struggle of the engineer, Louay Al-Basyouni, to reach NASA

In the report, the site narrates the details of Al-Basyouni, and his great achievement in "NASA" after a long story of struggle. Before his arrival in America, Al-Bassiouni struggled to study engineering, the difficulty of living in the Strip and the violations of the occupation against his family, and in his exile in the United States.

Al-Bassiouni grew up in the town of Beit Hanoun, in the northern Gaza Strip, and witnessed the first intifada (1987-1993). He was educated in a school run by the UNRWA in Gaza. "It taught me from a young age to never give up because you can fulfill your dream," he says .

The difficult environment in his hometown taught him creativity, fortitude and skills, and earned him the qualities that Gaza often possesses and exports them to the world.

In 1998, he traveled to the United States to study engineering, and was only able to visit Gaza in 2000. "Actually, that was the last time I went there," he says.

Although he learned a lot in Gaza about self-reliance, the move to the United States was shocking, as he says, "The reality was much more difficult than I expected. Everything was very expensive, from the rent to the university fees, so I had to work in many Jobs in restaurants and pizza delivery. "

This did not prevent him from enrolling in the university, as his studies ultimately led him to realize his dream. However, hurdles remained, not the least of which was the 9/11 attacks in New York and Washington.

Regarding this, he says: "Life after 9/11 became very difficult, and I was unable to pay the tuition fees, and my father was unable to help at all, because the occupation forces bulldozed the family's orange and olive groves."

"I needed to work another year without stopping to save some money," says Al-Bassiouni, who was forced to suspend his second year of engineering studies at the university. "I also transferred to the university in Louisville."

In Louisville, Al-Basyouni completed his studies and obtained a bachelor’s degree in engineering within two years, followed by one year later with a master’s degree. After graduation, he worked in different companies to obtain a lot of experience in the field of motors and electrical control devices. (Photo while he works for "NASA")

In 2012, he joined a company working on designing an electric plane, and ended up working for NASA in designing the Mars helicopter, where he received a number of awards .

"I was chosen to be the supervising engineer on the NASA helicopter team. I was responsible for the engine / controller, for the engine algorithms, servo motor selections, servo motor controls, and all the correspondence and communication between that and the main heat box, " he says.

In short, he proudly said, "I developed the inverter and servo motor controllers for the 'Ingenuity' helicopter that NASA designed for use on Mars."

All the international and local media reported the story of the Palestinian engineer from the besieged Gaza Strip. It seems that al-Basyouni’s picture is hanging on every wall in his home town of Beit Hanoun.

Al-Bassiouni interacts well within "NASA" and within the local community in the United States, as he is known to come from occupied Palestine. "The team I work with is multi-ethnic and multi-national. We accept each other, despite the differences between us," he says.

It takes more than 20 years to visit all the islands of the Philippines and spend only one day in each of them..and that's why