Panorama of weather around the world for the year 2020 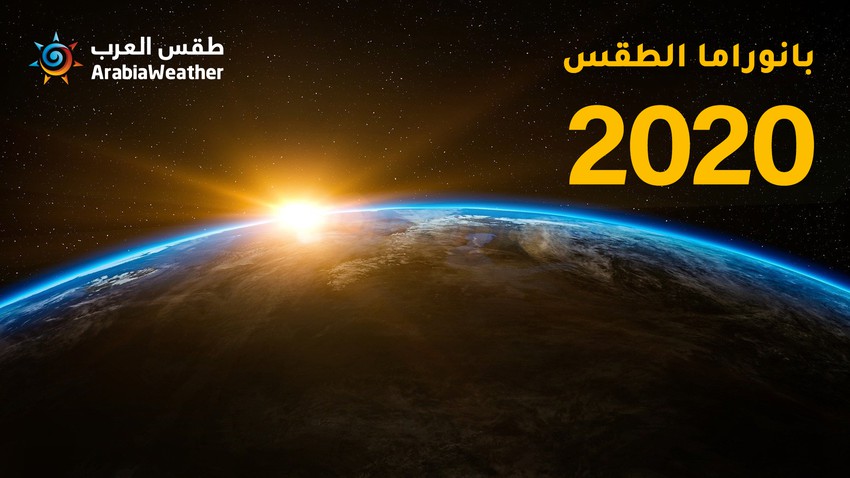 Arab Weather - During the year 2020, the world witnessed many influential events, some of which caused destruction and caused damage that may extend for years, others brought goodness, and other events that did not pass without leaving a distinctive trace in memory, and below we review the most prominent events that have passed on the world during The last twelve months of 2020:

A series of fires broke out in Australia's forests that lasted until January of 2020 AD, as the fires covered large parts of Australia's forests, forming huge smoke clouds that extended over most areas, and caused great losses to the country, and the states of New South Wales and Victoria were the most affected states, Over 2,000 homes were destroyed and thousands of people displaced.

A devastating earthquake measuring 6.7 degrees eastern Turkey, causing the deaths of at least 31 people and injured more than 1,600 people.

Although the rains of the fall of 2019 AD were generally scarce in many regions of the Levant, the period of Al-Murabaniyah, specifically the month of January, was heavy rain, as the rains fell on a daily or almost daily basis in many areas, which caused the formation of torrents and floods, as well as Snow fell on more than one occasion on the mountains of Syria and Lebanon, the southern regions of Jordan (the Tafila Mountains, al-Sharah and Wadi Rum) and some northern highlands, in addition to the snowfall in northern Saudi Arabia.

Winter was harsh in the Northern Hemisphere throughout February with more snowfall and cold waves recorded in many regions of the world.

About 70 villages in southeast Turkey are buried under meters of snow.

Two avalanches killed 41 people in the eastern part of Turkey, including some rescue teams that went to the region to rescue people trapped in the avalanche.

Rare and historical snow affects Iraq, including the capital, Baghdad, and a very large accumulation of snow in Iran

Snow in southern Jordan, and a wave of frost and ice affecting some regions of the Kingdom. 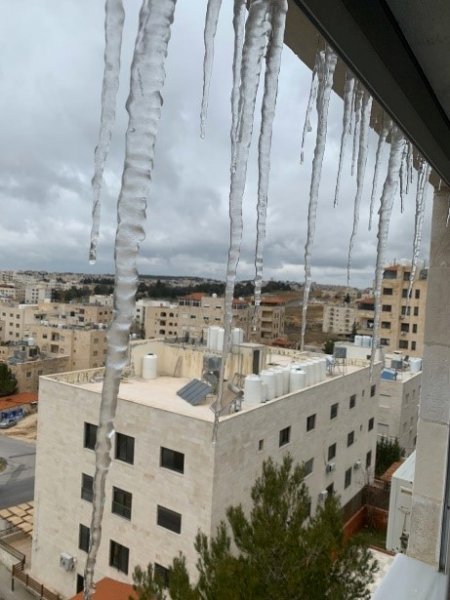 Highlights of the month of March 2020

A storm hit large parts of the Levant and Egypt (it was called in some media the Dragon Storm), and the storm caused heavy rain and strong winds that caused great damage to plantations, and caused waves to rise in the Gulf of Aqaba by about 2 meters and form torrents due to heavy rain Incessant.

An earthquake with a magnitude of 5.4 shook the Croatian capital, Zagreb, and caused damage to many buildings and caused great material damage, especially in old buildings in the historic center of the city, and caused many injuries among humans.

Highlights of the month of April 2020

April saw heavy snowfall in Dushanbe, capital of Tajikistan, for the first time in 26 years

A rare snowstorm in mid-spring hit southeastern Canada and northeastern regions of the United States of America, bringing heavy snow with an accumulation of 20-60 cm, which led to the closure of schools and power outages for more than 50 thousand people.

A snowstorm hit Scandinavia, as if it were from the depth of winter

A rare dust storm hit parts of Ukraine and Belarus, blocking vision in many streets, and winds reached between 15-20 m / s.

Torrential torrents have struck various parts of Yemen, including Sana'a and Aden, causing dozens of deaths.

After years of deficiency and drought, the Sea of Galilee was recorded to rise and fill completely for the first time since 1992

Several regions of the Sultanate of Oman were affected by the floods that swept the roads.

Highlights of May 2020 events

The collapse of the Serduba Dam in Uzbekistan killed 4 people and evacuated 90,000 people due to the floodwaters that inundated two villages of the Kazakh Turkestan region.

The floods inundated the roads and streets of the Pakistani city of Karachi due to heavy rains.

The mountainous heights of Jizan were subjected to heavy rainfalls, which caused the flow of torrents in the valley of Jura in Dayr Bani Malik, until the water level rose and overflowed in the city roads and caused some damage, as the torrents swept away a number of vehicles and raided the buildings, and it was a historic day in the memory of the people of the region.

Typhoon Fung Fung caused massive damage in several towns in the eastern Philippines, killing at least one person, destroying hundreds of corona isolation facilities, in addition to destroying roads, homes and fields of rice and corn, and caused the evacuation of more than 200,000 people from their homes.

Areas of the Sultanate of Oman were affected by a tropical storm that caused heavy rains accompanied by active to very fast winds, which led to the flow of torrents very quickly and cut off roads, and the waves reached a height of 4-5 meters, and the tropical storm caused the death of 3 people, in addition to several injuries.

Highlights of the month of June 2020

Torrential torrents after heavy rain in the Turkish capital, Ankara

Heavy hailstorms hit Greece at the gates of summer

Extensive and devastating floods in large parts of China

Highlights of the month of July 2020

The devastating and widespread floods continued in China, and were described as the worst floods in Chinese history

Floods in the Romanian capital, Bucharest

Strong torrents in the city of Taif in Saudi Arabia

Torrential torrents and the killing of dozens in Karachi-Pakistan

Eruption of Sinabung volcano in Indonesia

Seoul and severe hailstorms in Spain and Italy

Aqaba records the highest temperature in the entire globe on 5-9-2020, when the temperature reached 48.5 Celsius

Strong torrents in parts of eastern Algeria and Tunisia

Extensive fires in the mountains of Taif - Saudi Arabia

Areas of France and Italy witnessed torrential rain and winds of up to 150 km / hour with the arrival of Storm Alex, which hit the western coast of France before reaching northern Italy, which led to the occurrence of massive torrents that swept the roads and caused landslides and caused damage to homes and injuries. mankind.

An early snow wave swept across the city of Zakopane, Poland, and lasted for several days, with a total snow accumulation of 317 cm.

An earthquake measuring 5.6 on the Richter scale, with its epicenter near the city of Christovik, south of the Icelandic capital Reykjavik, struck many people without causing any injuries.

A water tornado (or what is known as the sea dragon) hit the port of Beirut.

The Libyan capital, Tripoli, and the city of Misurata witnessed a strong thunderstorm, during which hail pellets fell in large sizes, some of which reached 20 cm in diameter, in addition to strong winds and torrential torrents, and the hail pills shattered car windows and caused great damage without causing casualties.

A devastating earthquake with a magnitude of 7 struck the Aegean Sea, 17 kilometers off the coast of the Turkish city of Izmir, and the depth of the earthquake was 16 kilometers, as people felt the earthquake throughout the region, including in Istanbul, the Greek islands and even the capital Athens, and the earthquake caused Dozens of buildings collapsed, and the number of victims exceeded a hundred and hundreds were wounded.

The earthquake that struck the Aegean Sea off the city of Izmir caused a tsunami that led to a partial tsunami on the Greek island of Samos and parts of the Turkish city of Izmir.

A huge fire broke out in the forests of Jabal Ghalama in Tanuma Governorate, in the Asir region, in southern Saudi Arabia. The fire spread over a wide area after the winds helped spread it, and thick smoke rose over the sky.

Highlights of the month of November 2020

The region of Makkah Al-Mukarramah and the Holy Haram witnessed heavy rains that led to the flow of torrents.

The strong cyclone Goni hit the Philippines, one of the strongest tropical cyclones ever recorded, with winds reaching a maximum of 195 miles per hour, and the cyclone crossed densely populated areas, affecting between 19 - 31 million people, especially those who live in danger areas and in The capital, Manila.

Heavy rains in the city of Sanharo, in the northeastern province of Pernambuco, led to the declaration of a state of emergency and the displacement of hundreds of people after floods inundated large parts of the city, and caused significant damage to homes and infrastructure.

Torrential torrents swept through several regions in Spain, flooded large areas of the Valencia region, and caused great damage in several cities, as well as agricultural crops and infrastructure.

The torrential rains that fell on the city of Al-Bayda in Libya caused floods to rush to the outskirts of the city, which led to the closure of roads, and most neighborhoods turned into large pools of water, which led to the imposition of a curfew. 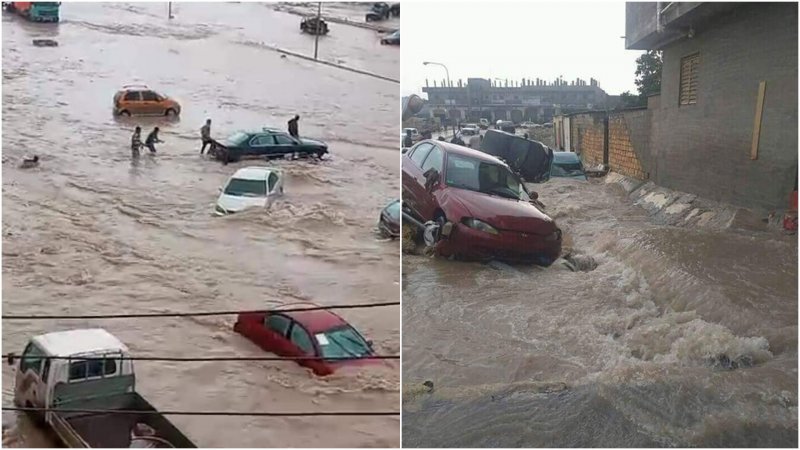 A Category 5 Hurricane on the Saffir-Simpson Hurricane Wind Scale hit the southwestern Caribbean regions near the coast of northeastern Nicaragua, where the maximum wind speed reached 260 km / h and brought catastrophic effects on Central America, and the hurricane caused devastating floods across America Central and Southern regions, where 40 people died and hundreds of thousands were forced to flee their homes due to mudslides.

Highlights of the month of December 2020

Northern Pakistan witnessed record snowfall, which prompted many tourists to flock to these areas to enjoy the snow, while people and some livestock were trapped under the snow, and the snow height in some areas reached 60-90 cm, which led to the closure of some roads.