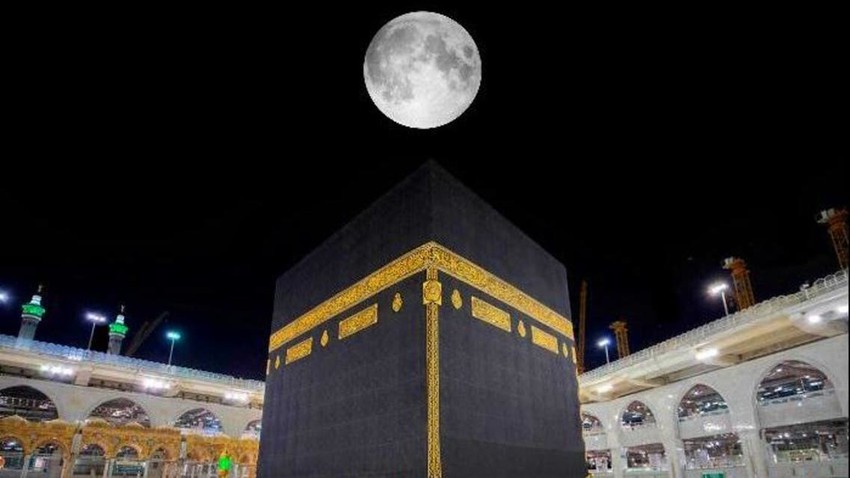 Arab Weather - Sinan Khalaf - The sky of Makkah Al-Mukarramah will witness next Thursday the perpendicularity of the moon to the Holy Kaaba, in conjunction with its occurrence in the full moon phase, which is the first orthodoxy in 2021.

The head of the Astronomical Society in Jeddah, Eng. Majed Abu Zahra, said, "The moon will rise with sunset from the northern / northeastern horizon, and set in the north / northwestern horizon, which means that it will simulate the high path of the summer sun after six months across the night sky." The Arctic Circle, so the moon stays 24 hours above the horizon, like the midnight sun in the summer. "

He added: "In the southern hemisphere, the full moon follows the low path of the winter sun, where the moon is low in the sky, just like the winter noon sun. As for the south of the Antarctic Circle, the moon will remain below the horizon for 24 hours. The moon will reach the moment of full moon. Completed at an angle of 180 degrees from the sun at 10:16 PM KSA (07:16 PM GMT) and thus will have completed half of its orbit around the Earth during this month. "

He continued: "This will be followed by the arrival of the moon for an orthogonal moment at 12:43:34 after midnight KSA time (09:43:34 pm GMT) and it will be at an altitude of 89.57.46 degrees, and its disk is fully illuminated by 99.9% and at a distance of 381.125 km from The earth, after being baptized, the moon will remain visible in the sky for the rest of the night until it sets with the rise of the Friday sun.

He explained, according to "Al-Arabiya.net" that this astronomical phenomenon can be used to find the direction of the Qiblah in a simple way from several regions around the world, as residents in geographical locations far from the Grand Mosque can rely on the direction of the moon that points to Mecca "in a manner comparable to the accuracy of smart phone applications. ".

He added, "In general, the middle of the lunar month is the ideal time to observe the radiating craters on the surface of the moon through binoculars or a small telescope, unlike the rest of the terrain that appears flat due to the fall of the entire moon in the sunlight. These radiating craters are deposits of bright reflective materials that extend "From the center of the craters outwards for hundreds of kilometers. It is believed that these craters are newly formed."

He concluded his speech by saying, "During the coming nights, the moon will rise late by about an hour every day, and within a few days it will be seen only in the sky of dawn and early morning. At that time, it will reach the final square stage a week after it has fallen into the stage of the full moon."