Qatar and Bahrain | Monitoring unstable weather conditions resulting in unusual thunderstorms for this time of the year.Details 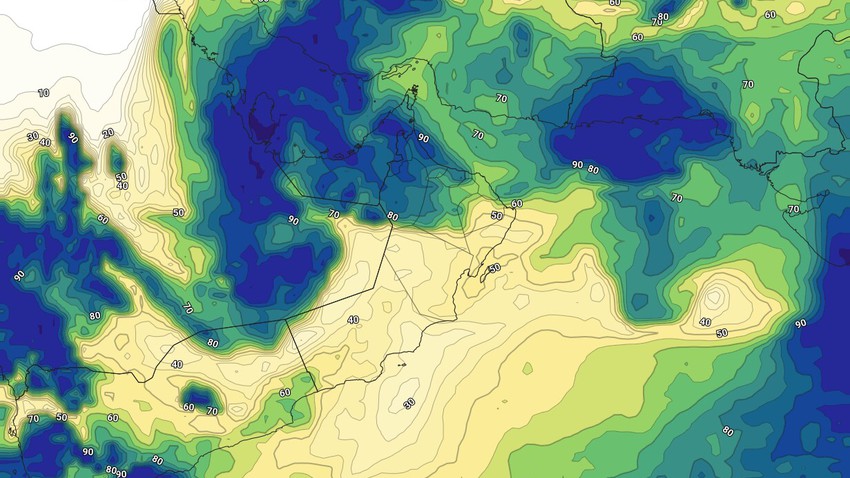 Arab Weather - The latest indicators of the weather maps in the Arab Regional Weather Center indicate that Qatar and Bahrain are affected by an atmospheric depression that is accompanied by the flow of quantities of moisture with tropical characteristics (warm and humid) through the various layers of the atmosphere, which increases the possibility of unstable weather conditions resulting in precipitation Unusually thunderstorms for this time of year. Details

Amounts of clouds erupt at different heights in the foreground with the afternoon and afternoon hours on Wednesday, and it is not excluded that some cumulus clouds will be interspersed with it, so that the possibility of local showers of rain for a temporary period over parts of the State of Qatar may be accompanied by thunder.

It is expected, God willing, that the State of Qatar will begin to be affected by the dawn hours and Thursday morning by unstable weather conditions that will continue for the rest of the day. The capital, Doha, is expected to be rain of varying intensity, and it is not excluded that it will be heavy at times and accompanied by the occurrence of thunderstorms.

With the hours of Thursday morning and day, unstable weather conditions gradually extend towards the State of Bahrain, accompanied by thunderstorms at intervals.

The same thunderclouds in both countries are actively accompanied by the speed of surface winds that raise dust and dust, which leads to a decrease in the horizontal visibility, and leads to high waves on the beaches and in the depth.

As a result of the possibility of thunderstorms, it is feared that the water level will rise in the roads and the occurrence of water gatherings, and we advise the Arab Weather Center to follow up on weather forecasts issued in the coming days.