Rainbow colored mountains .. what is it really? 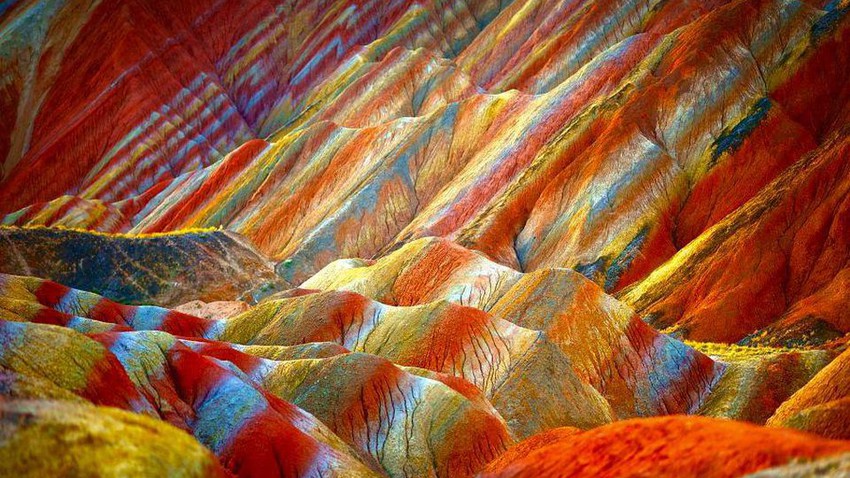 How were the rainbow mountains formed?

The rainbow mountains consist of chalky sand rocks and mud rocks, which were deposited in China before the formation of the Himalayas, and during that it was deposited with sand, iron clay and some rare minerals that provided the rocks with the main component to form the colors we see today.

But what turned the flat sedimentary layers into mountains was the collision of the Indian plate with the Eurasian plate about 55 million years ago, and the pressure of the two plates led to the folding of the sedimentary rock layers into mountains, and after the mountains rose, the sedimentary rocks that were hidden under the surface of the earth were revealed, after the weathering processes removed And erosion of the upper layers of continental rocks and revealed the basic formations of rocks containing minerals, with different chemical properties, and this difference caused the appearance of these amazing colors over the mountains.

How did the minerals reach these mountains? How did minerals color the rocks?

Groundwater leaves, when it moves through sandstone grains, some minerals that are deposited between the grains. These sediment materials can accumulate until it clogs the spaces or pores between the sand grains, making them fixed in place, and this process is what adds minerals to sandstones around the world, and shows them In different colors.

The dark red color that appears on sandstone, for example, is due to iron oxide, also known as hematite ( Fe 2 O 3 ), which results from the iron mineral deposited between grains of sandstone, as weathering processes mixed with water and oxygen lead to oxidation of the iron element, in a process Similar to what happens when a piece of iron metal is left in the rain and a dark red layer of rust forms on it, and this is how dark red streaks appear in the mountains of the rainbow.

There are different colors produced by different oxidation metals, as dying limonite (limonite) oxidizer or goethite (goethite) sandstone in brown or yellow, and can produce magnetite (magnetite) black color on the sandstone, and if there is iron sulfide, it appears sand color yellow sulfur resulting from metal, while the green color, it is often due to the clay chlorite (chlorite) or iron silicate, and these are just some examples of how to change metals and materials for the color of sand rocks.