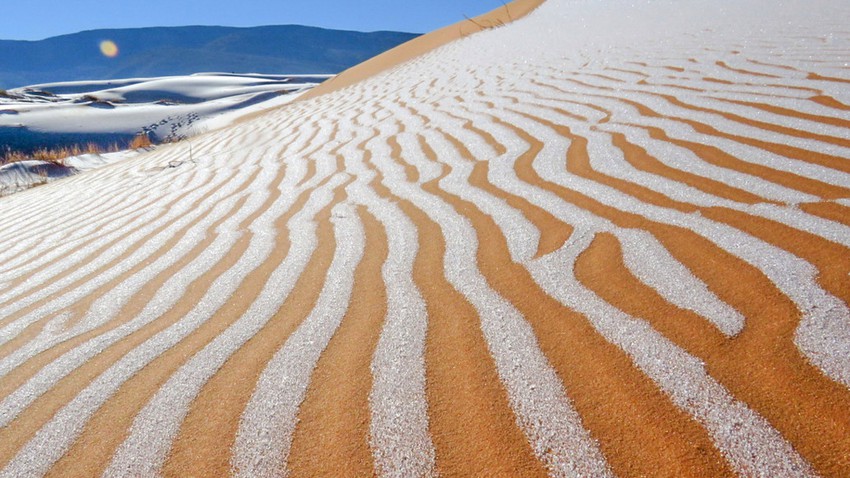 Weather of Arabia - The presence of snow in the largest hot desert in the world is a rare event, but on January 19, 2021, one of the driest places in the world woke up to an ice covering the sand near the desert town of Ain Safra, northwest of Algeria, where lines of ice crystals extended As far as the eye can see over sand dunes, in an extraordinary weather phenomenon that has made headlines around the world ever since.

The Sahara Desert is the largest hot desert in the world, as it extends over an area of ​​more than 8.6 million square kilometers across North Africa between the Atlantic Ocean and the Red Sea (while Antarctica is in the Antarctic, and the Arctic in the Arctic is the largest cold desert). 1000 meters above sea level and surrounded by the Atlas Mountains near the Algerian-Moroccan border.

Although the accumulation of snow and ice in the north of the desert is unusual, but it happened previously, as the ice on Tuesday represents the fourth event in 42 years in which Ain Safra has been witnessing snowfall, as previous snow has been repeated in 1979, 2016 and 2018, and it was falling The snow in the past is more intense than this time. In 2018, some regions of northwest Algeria witnessed up to 40 cm of snow, while the 2016 snowstorm covered more than 1 meter in some areas.

And NASA said in a statement after the 2018 snowfall, which was visible from space, that the desert is likely to experience snow at higher altitudes, such as the Atlas Mountains. The Moroccan side of the Atlas Mountains also saw heavy snowfall in 2005 and 2012, according to NASA.