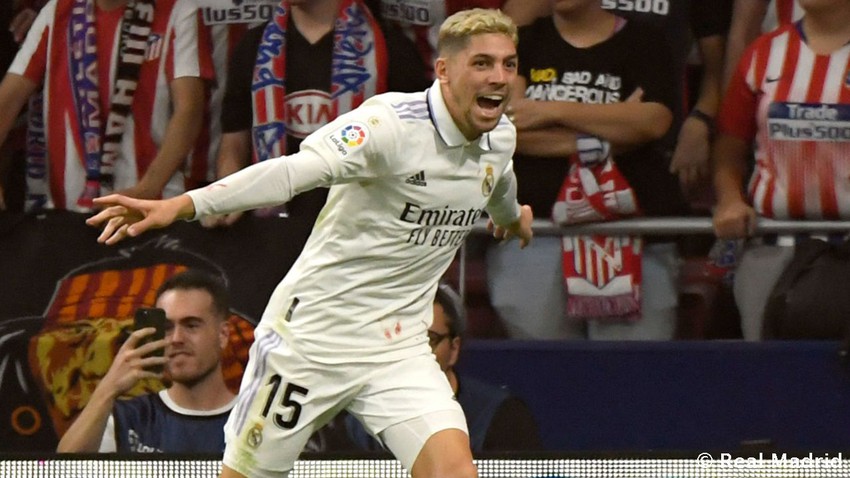 Weather of Arabia - Real Madrid beat Atletico in Metropolitano. Valverde, who scored the second goal for the league leaders, expressed his happiness with the victory: "We struggled to keep the ball at the beginning, we knew that they would press, but we entered the atmosphere of the match with the passage of minutes, we found the gaps, and Rodrygo and Fini were great in creating opportunities."

"It's one of my advantages, breaking the lines with the ball. We knew they were playing with consistency on one side to press - and with good ball leadership we were able to score the first goal."

end of the match

"We always look for more. In the second half we played more smoothly. When you are two goals up you relax a little bit sometimes, but that shouldn't happen because we could have scored the third goal and we offended ourselves. In the end we conceded a goal and then strengthened our defenses".

kick in the knee

"I took a kick in the knee, I felt pain in one of the jumps and in the attack, but the pain disappeared with the passing of the minutes. I am fine and will be in the national team tomorrow."

Carvajal: "We came here to win"

"We are very happy and we achieved our goal. We came here to win. It's three points and it has a special flavor in the derby. The goal was to achieve another victory. We performed well in the first half, especially in the first 30 minutes. He scored two goals and we had another chance. In the half The second we lacked the ball to hurt the opponent. We felt comfortable with 0-2 and then things got a bit complicated. We reach the international break with good feelings."

"Keeping a clean sheet is one of our tasks and we struggled in the end. The team played a perfect match. We continue to win points. The international break is a break for the team and to re-energize."

"Karim is a key player in the team, but we have a great team. Rodrygo had to play this evening in position (9). He shone and scored a great goal that gave us wings in attack."

Courtois: "We were looking forward to continuing the winning streak"

"We are very happy because winning the derby was important after we lost the last match against Atletico. We were looking forward to continuing the winning streak and staying at the top of the League."

"Our idea was to play with the ball and bring their pressure because they left some gaps. We looked for individual matches and Rodrygo is very fast. We took advantage of that and scored two goals. They had two or three chances and we saved well. We regret the goal they scored in the match. They played well on the balls. We struggled a little bit, but the win is what matters."

"I tried to give the team a break, look for holes and then attacks. It went well in the first half. After that, with more pressure and tiredness, we struggled a little bit in possession."

"We leave with sadness because the international break puts an end to the continuity. We return against Osasuna after our return, a team that started the league well. But we are happy with the complete victories and winning three points at a difficult stadium. We have to continue the winning streak at home. We will rest a little and without injuries."