Weather of Arabia - Tourism in the city of Salalah is active for many reasons, including because of its distinguished geographical location, as it is a coastal area located on the Arabian Sea, in addition to the large number of natural and archaeological places, which makes it the choice of many tourists, and we review with you the expected weather in the city of Salalah in the coming days.

Weather suitable for going out and tourism in Salalah

Unlike most areas in the Sultanate of Oman that live in a hot climate, the weather in the city of Salalah during the coming days is expected to be normal summer, with temperatures around their annual rates for this time of the year, and this atmosphere is ideal for going out with family and friends, taking into account avoiding exposure Direct sunlight during the afternoon and afternoon, and drink plenty of fluids. 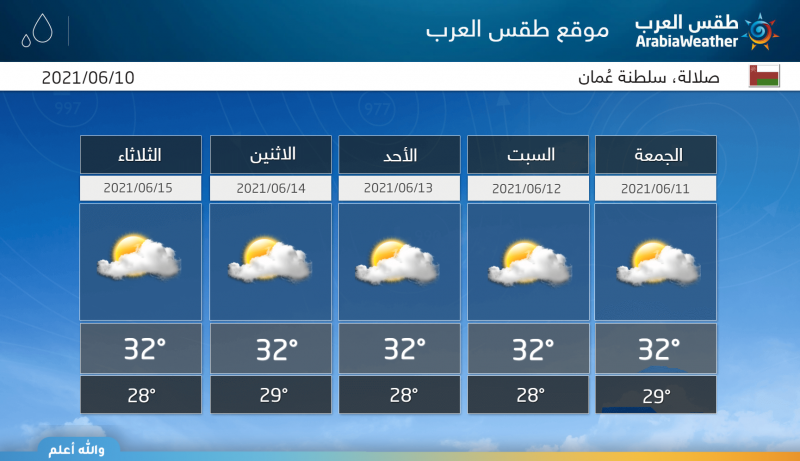 The winds will be southerly moderate in speed, active at times in the afternoon, and this activity includes the Arabian Sea, where the sea is very turbulent and the wave height exceeds four meters, but during the night hours the weather is generally warm, surface moisture levels rise and low clouds and fog are formed.

According to medium-term weather maps, it is not expected that there will be a significant change in temperatures during the coming period, as the usual summer weather continues to prevail, with the weather remaining stable in most periods.

Sultanate of Oman | The body of the fourth missing and the good was found in Seoul, the last pictures, `may God have mercy on him`