Arabia's weather - sand and dust storm are two weather phenomena that usually occur in arid desert and semi-desert areas, which are large clouds of dust that are blown by strong winds.

What does dust consist of?

Dust consists of infinitesimal minutes that rise up in the layers of the atmosphere to form what looks like dust clouds so dense that they may block the sun's rays and may sometimes lead to a lack of horizontal visibility in a large and large area.

Why do dust and sand storms form?

There are many causes, including severe surface winds and drought, and when strong winds blow, they cause dust and sometimes dust storms move from one region to another, and it is possible that a dust storm affects more than one country at the same time.

Causes of sand and dust storms

How do dust storms start?

Also watch this video showing how dust storms are created

When do sandstorms occur?

Sandstorms can occur in all seasons, but greater chance of occurrence with transitional periods in the spring and fall seasons.

Sources of dust in the world 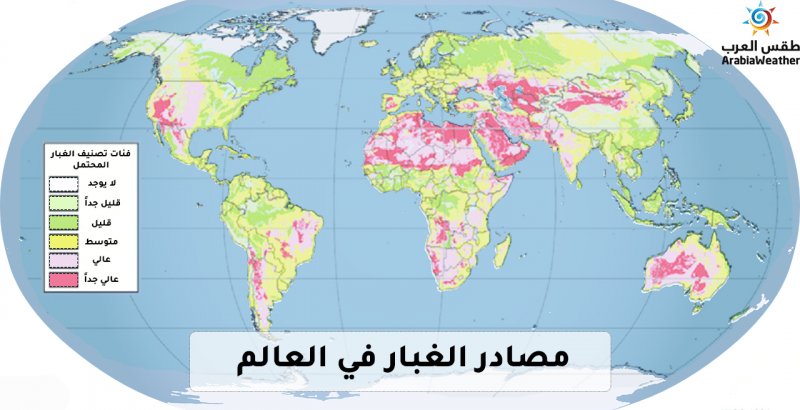 Image taken from space via NASA satellites on 8/2/2015

The horizontal visibility after this storm decreased at that time, to less than 300 meters in most regions of the Levant, and it is noteworthy that the storm began on September 6 and continued until September 13, 2015.

This storm has resulted in the injury of many citizens in the Levant, as well as suffocation, and dozens of people have suffered from respiratory health crises, the closure of schools and impeding traffic.