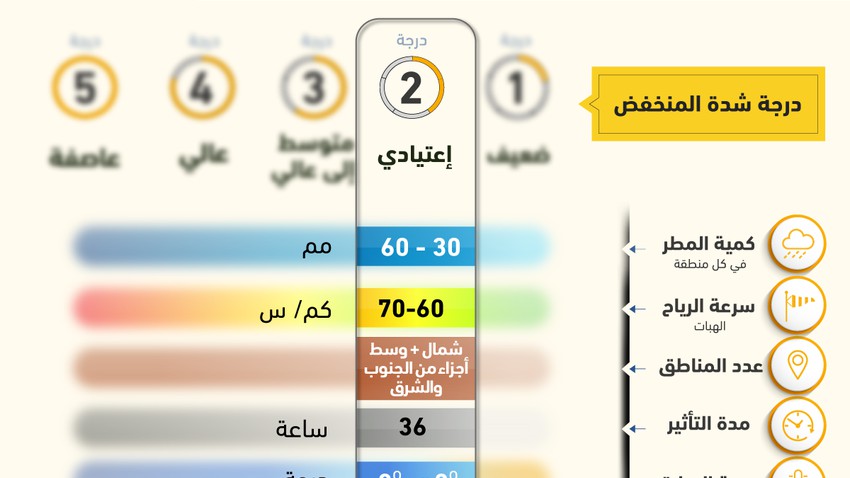 Weather of Arabia- During the past few hours (Thursday morning) an air depression formed to the southwest of the island of Cyprus, accompanied by a cold to very cold air mass, pushed towards the eastern basin of the Mediterranean through the Black Sea and Turkish territories as a result of the presence of an air elevation in many parts of the continent European.

This depression will remain in the island basin of Cyprus throughout Friday, before moving towards the west of the Syrian territories on Saturday, which means that the Kingdom - in particular - will not be physically affected by this depression before Saturday afternoon, unlike Syria, Lebanon and northern Palestine.

The actual effect of this depression extends for about 30 hours, from Saturday afternoon until Sunday evening, God willing, bringing heavy rains at intervals in the northern and central regions of the Kingdom, which constitutes an additional boost for the rainy season in these regions, while the rain performance continues to weak in highlands Southern region, according to current updates and indicators.

Consequently, when categorizing the effect of this depression on the Kingdom according to the “Arab Weather” index of the severity of the depressions of the first degree weaker towards the most severe and exceptional fifth degrees, we find that this effect falls within the “second degree” in the sense of a normal low-impact air.

Whereas, around midnight Friday / Saturday until Saturday morning, the opportunity is prepared, weakly, for light and unaffected snow showers in the high mountainous heights throughout the Kingdom, which rise more than 1000 meters above sea level.

However, at the actual start of this depression in the Saturday afternoon, God willing, this great cold will have left the Kingdom’s atmosphere, and thus the chances of snowfall will end on the aforementioned areas, and these opportunities will be confined to the high mountainous southern highlands on Saturday evening until Sunday morning, However, as the report mentioned, the focus of this depression is more pronounced on the northern and central regions without the high southern region heights towards Tafila and Al-Sharah.

Jordan | Another rise in temperatures with relatively hot weather on Sunday

What is the significance of the Jordan River and why is it called by that name?