Saudi Arabia: a decrease in temperatures and unstable weather conditions in many regions during the coming days (details) Arab weather - weather maps that sense the movement of air masses show expectations that large parts of the Kingdom of Saudi Arabia will be gradually affected during the coming days by a moderately hot and humid air mass, after which temperatures will drop to autumn levels, and cause air disturbances in several parts of the north of the Kingdom accompanied by With thunderstorms of varying intensity, God willing.

Rain includes 5 areas on Wednesday, and a significant drop in temperature in the north 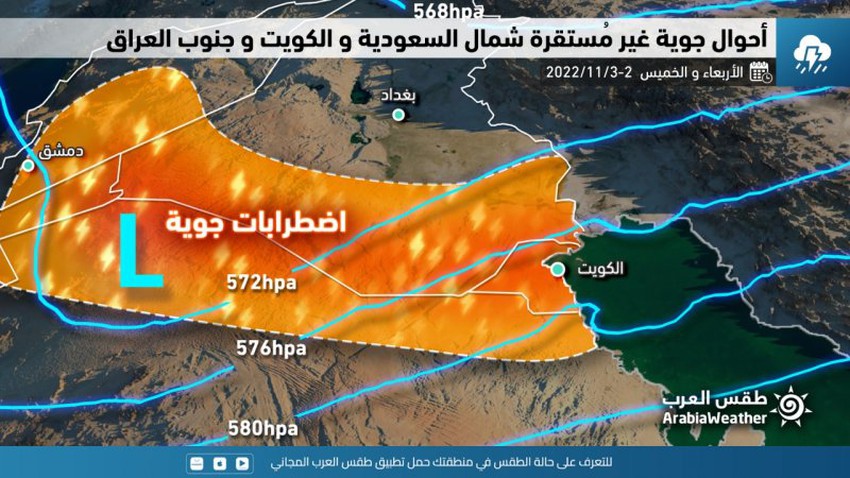 After noon hours, amounts of clouds at different heights multiply in parts of the highlands of Jazan and Asir, and cause local showers of rain that are accompanied by thunder sometimes.

As for the evening and nightfall, the north of the Kingdom is more affected by the state of atmospheric instability, and the weather is generally relatively cold in those areas with the appearance of amounts of clouds at different altitudes, and thunderstorms of rain are expected, God willing, in random areas of the border area. The northern and parts of the northern and eastern Al-Jawf region, and some of these showers are heavy in some neighborhoods and narrow geographical areas, causing the flow of valleys and reefs. It is not excluded that some rainy clouds will extend to limited parts of the north and east of Hail, God willing.

As for Thursday, the state of atmospheric instability includes parts of the north of the eastern region, with the movement of the depression in the upper layers of the atmosphere to the east, so that the opportunity is prepared for thunder showers of rain, God willing, in separate areas of the northern border region, especially the eastern parts of it in addition to parts of the north The eastern region may include neighborhoods of Hafr Al-Batin, and these thunder showers are accompanied by strong gusts of wind.

It is expected that the autumn air mass will deepen to dominate large parts of the regions (Northern Borders, Al-Jawf, Tabuk, Hail, Al-Qassim, and Al-Madinah Al-Munawwarah) and will be accompanied by a decrease in temperatures in those areas. in some areas.

With the evening and night hours (Thursday/Friday night), the state of atmospheric instability is declining in most areas, with the opportunity remaining in the early hours of the night for sporadic showers of rain in limited parts of the north of the eastern region, and night temperatures decrease in large areas of the north And the center of the Kingdom up to the capital, Riyadh, with a rise in surface humidity.