Saudi Arabia | A rainy state is considered the most comprehensive and extensive since the beginning of spring, bringing rain and dust to many areas 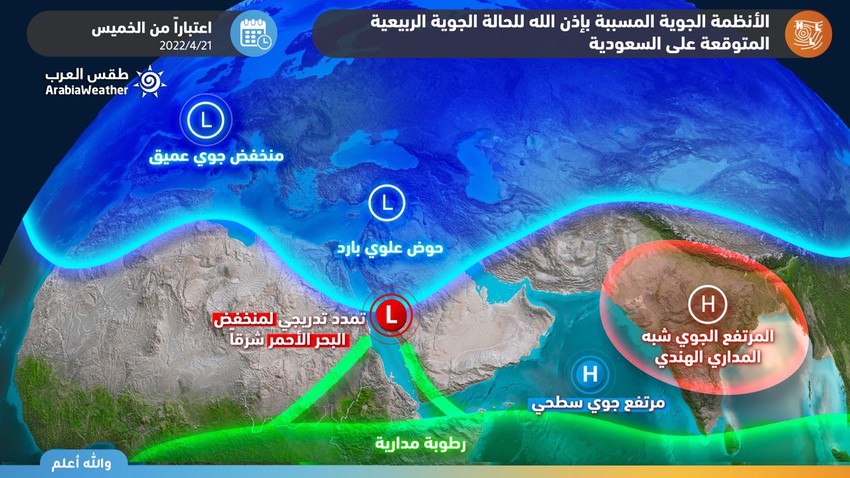 Arab weather - the latest weather maps received from global centers and others developed from the Arab weather internally , indicate expectations that the Kingdom will be affected in the coming days by a rainy weather condition that is considered the best this spring in terms of the area of the affected areas and the abundance of clouds accompanying them after the will of God, with an intensification in The impact of the rainy conditions early next week.

Weather forecasters at the Arab Weather Center for Meteorology and Weather Forecasts said that the first weather disturbances will begin, God willing, on Thursday, on the western highlands of the Kingdom and its eastern slopes, and extend with the afternoon and evening hours towards random parts of the administratively Riyadh, Qassim and Hail regions, and the area of rain expands during Friday and includes The highlands of Jazan, Asir, Al Baha, Makkah, Madinah and its eastern slopes, in addition to random parts of the administratively Riyadh region, Hail and Qassim, with an opportunity for some rainy clouds to extend to the northern sector of the Kingdom. Thunder, with the possibility of water gatherings, God willing. 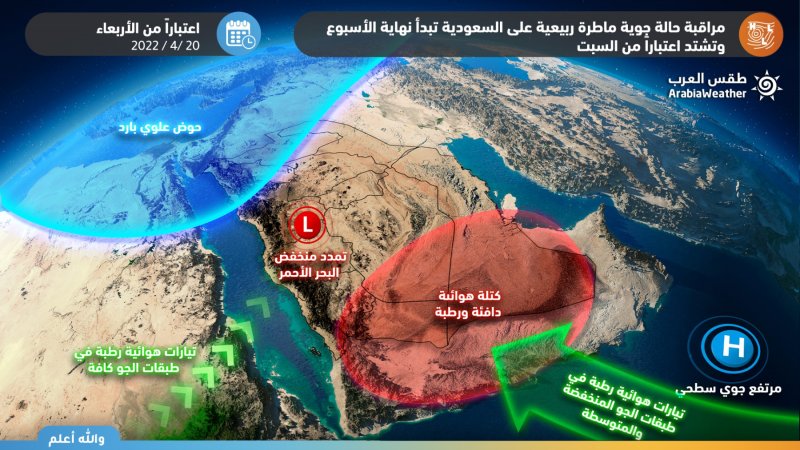 And weather forecasters added that the weather conditions during this period of the year in particular are distinguished from others by the departure of the bases of cumulus clouds from the surface of the earth, as a result of the drying out of the lower layers of the atmosphere, and this means the evaporation of part of the rain before it reaches the surface of the earth, and this leads to the occurrence of cooling/decrease In the temperatures inside the cloud, the density of the air rises, and it becomes heavier in weight compared to the surrounding air, then it rushes strongly and hits the surface of the earth directly. Especially in desert areas.

The outputs of the computer processing in the Arab Weather Center indicate expectations that the upper cold basin will deepen the Kingdom’s atmosphere on Saturday and Sunday 23 and 24 April 2022, coinciding with the blowing of warm and humid air currents from tropical shows, and the displacement of the subtropical air high from the atmosphere of the region, which leads to an expansion The intensification of unstable weather conditions in light of a superficial response to the Red Sea depression, clearly and effectively. This system works to raise the power of rain and intensify the intensity of thunder clouds on the mountainous heights and eastern slopes located in the west of the Kingdom, and the extension of rainy clouds to include large parts of the Kingdom, God willing.

It is expected that rains will be thunder and heavy at times in several parts of the Kingdom, especially in Hail, Al-Qassim and Medina, and it will be accompanied by showers of hail and thunderstorms, where the formation of water gatherings or torrents is not excluded, while the rains are less strong in the rest of the regions.

The weather forecast staff looks again with optimism for the coming period, as the numerical simulation of the atmosphere indicates that the opportunity is favorable for more weather conditions during the last week of this month, which may include new Gulf countries, God willing. It is not possible to deduce all the details from now on for that period, but that period is a promising period for improving the rainy reality, which suffers from great weakness.

Rain is expected in the capital, Riyadh

A high chance of rain, especially early next week

And as of the beginning of next week, it is expected that the upper cold basin will move towards the east, to improve the chances of rain and be accompanied by thunder sometimes, as convective clouds multiply, and the chances of rain will increase in the capital, Riyadh, and given the time period, it is advised to follow up on the reports issued on a daily basis, as they will be List the details steadily, God willing.

These expected atmospheric disturbances come due to a combination of a shallow drop in atmospheric pressure and a dynamic contribution to the vertical thermal difference and a superficial response as well as to the Red Sea depression effectively, which also works to excite warm and humid air currents from tropical latitudes. The presence of temperature differences of up to 30-35 degrees Celsius, and perhaps more, between the surface of the earth heated by solar radiation and the cold air located at the top is the first condition for the condensation of cumulus clouds, and the extent/quantities of water vapor extension towards the Kingdom’s atmosphere is an important condition as well. To ignite these thunderclouds, which is something that numerical models find very difficult to sense until now, so the computer modeling outputs still fluctuate around the intensity of the rainy condition.

Therefore, all of the above is considered within the context of the forecasts of the latest weather readings issued by the Arab Regional Center for Meteorology and Forecasting, so updates will be released that will highlight more details incrementally whenever needed, God willing.