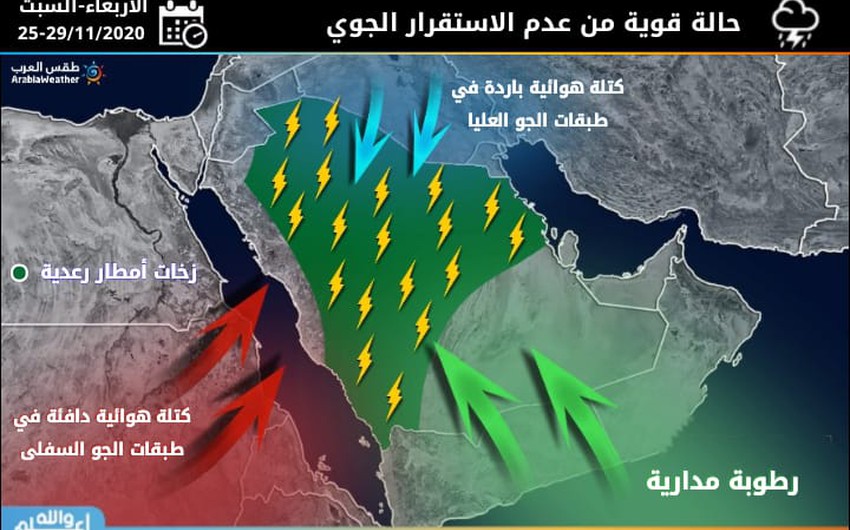 Weather of Arabia - The outputs of numerical models indicate that the Kingdom of Saudi Arabia is affected by a state of atmospheric instability on Wednesday evening, as thunder clouds proliferate and showers of rain and hail fall in large parts of the southwestern regions, including Mecca and the holy sites.

The state of instability continues for several days, intensifies and widens its impact!

Saudi Arabia continues to be affected by a strong state of air instability during Thursday and the weekend, as its pace intensifies and the area of influence widens to include thunder clouds in large areas of the Kingdom of Saudi Arabia, and heavy rain is expected accompanied by thunderstorms and hail, which leads to the formation of strong torrents and a rise in water levels. Clearly, thunder clouds are associated with great activity on the speed of the surface winds, which leads to excitation of dust and dust in their areas of influence.

The state of atmospheric instability is caused by the progression of a cold air mass in the upper atmosphere and the great outflow of moisture from the tropical state in the Arabian Sea!

The reason why the Kingdom of Saudi Arabia is affected by a strong state of atmospheric instability is the approaching of a cold air mass in the upper atmosphere from the northern direction, coinciding with the advancement of a warm air mass in the lower atmosphere, and the most important thing that contributed to the development of the situation is the flow of large amounts of moisture in The different atmospheric layers as a result of remnants of the previous tropical state in the Arabian Sea.

1- Be aware of the risk of floods forming in different regions of the Kingdom.

2- The risk of dust waves forming as a result of wind activity associated with thunderstorms.

Important advice to follow when driving in foggy weather