Saudi Arabia | Alert from exceptional and unusual weather systems that begin to affect the Kingdom, and rain is expected in large areas 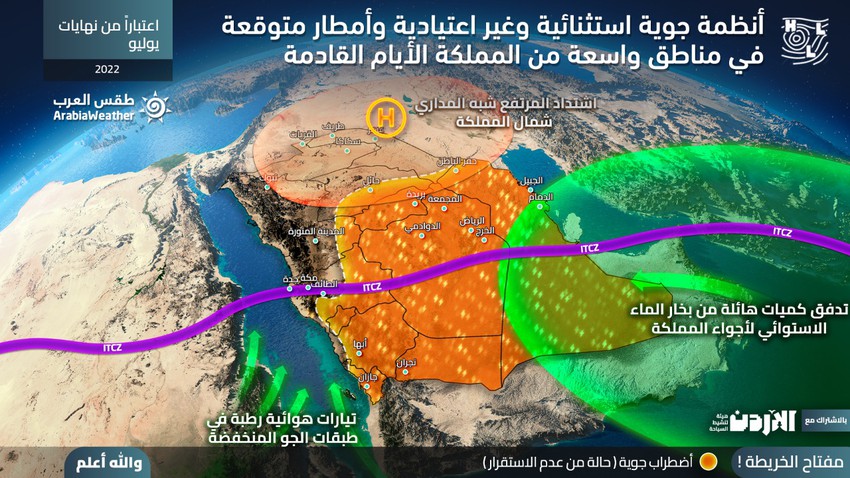 Arab Weather - Sinan Khalaf - The weather forecast staff at the "Arab Regional Weather Center" monitors the latest developments and developments in the exceptional and unusual weather that is expected to begin its actual and direct impact on large parts of the Kingdom of Saudi Arabia, including the capital, Riyadh, accompanied by thunderstorms and waves of dust. As of Sunday.

After it struck Oman, the UAE and some Gulf countries

In the details, the latest reports issued by the “Arab Regional Weather Center” indicate that the Kingdom of Saudi Arabia was affected by an extension of an upper and surface air depression, which moved from northern India through southern Pakistan towards the Sultanate of Oman and the UAE, in conjunction with the movement of the orbital convergence line “ITCZ” towards northern The Arabian Gulf region, which allowed the rush of large amounts of tropical moisture coming from the Arabian Sea towards the Gulf countries, and thus the emergence of severe weather disturbances that affected the Emirates, Oman, then Qatar and Bahrain. Tropical thunderstorm cumulus accompanied by heavy thunderstorms in large areas. 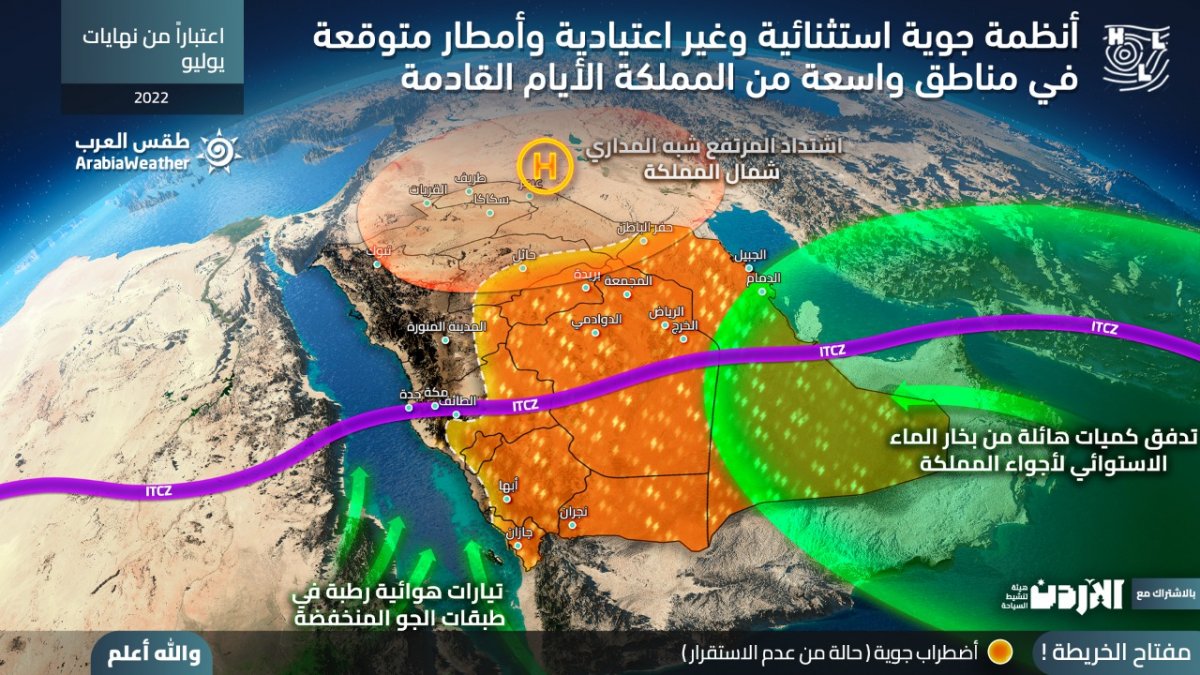 Areas covered by rain forecast on Sunday and Monday

Although parts of the Eastern and Riyadh regions were affected during the past 48 hours by limited weather disturbances, the direct effects are expected to actually start from Sunday, coinciding with the deepening of tropical humidity in the atmosphere of the region, and it is expected that as of Sunday, cumulus clouds will activate in parts of the region. Wide areas of the Sharqiya, the Empty Quarter and Riyadh "including the capital", and may extend to affect Hafr Al-Batin at intervals, accompanied by lightning, thunder, and showers that may be heavy with rain and hail.

Forecasts indicate that the aforementioned areas will continue to be affected by chances of thunderstorms on Tuesday and Wednesday, with the opportunity to extend further to the north to affect the Qassim region. Arab weather notes that this type of thunderstorm clouds at this time of the year is often accompanied by the formation of descending air currents, which create dust waves and possibly local sandstorms in the affected areas, causing a noticeable decrease in the range of horizontal visibility and sometimes its absence.

It is heavy and may bring hail showers with it

The continuation of the monsoon rains in Najran on the resorts

In this period, "from Sunday to Wednesday", the southwestern highlands of the Kingdom will remain under the influence of daily weather fluctuations, as forecasts indicate the formation of rainy thunderclouds in Jazan, Asir and Al- Baha , and expectations indicate that these areas will be subject to heavy rainfall on a daily basis. , accompanied by intense cold showers sometimes, with a high chance of torrential rain, especially in low-lying areas and mountain slopes.