Saudi Arabia | An expected return to the dusty weather on Tuesday and Wednesday in many areas, including the city of Jeddah 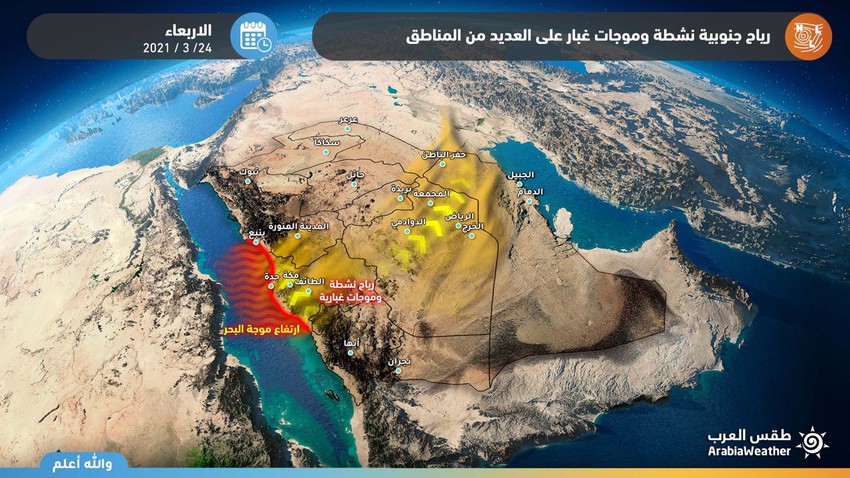 Arab Weather - Sinan Khalaf - An expected return to the dusty weather on Tuesday and Wednesday in many regions, this is indicated by the latest weather forecast issued today by the forecast staff, and the following are its details:

Dust is possible Tuesday and Wednesday

Active winds raise dust in many regions of the Kingdom

In the details, it is expected to push towards the Levant and the far north of the Kingdom of Saudi Arabia   A cold air mass, in conjunction with the control of a hotter air mass in the middle and south of the Arabian Peninsula, this air system and the thermal differences between the masses will be pushed, after God's will, by strong-speed winds towards all regions of the north, central and east of the Kingdom, the speed of some of its gifts up to 80 km / hour , And these winds are considered capable of forming dust waves with a significant decrease in the horizontal visibility.

As for the areas covered by forecasts of strong winds and dust, they are all of Al-Jawf, the northern borders, the Hail region, Al-Qassim and Hafar Al-Batin, and up to the north of the Riyadh region, as well as the city of Jeddah, Makkah and Madinah, and due to the remoteness of the time period, these weather updates remain unstable and need continuous follow-up.

Danger of severe winds that gust up to 80 km / h

Tips Tips for taking medications during the holy month of Ramadan