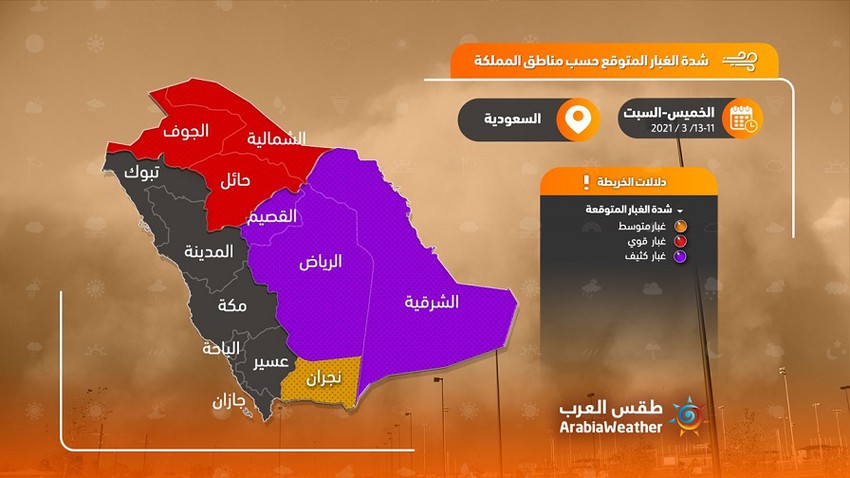 Weather of Arabia - Sinan Khalaf - The Arab Weather forecast staff identified the areas most affected by the weather fluctuations expected at the end of the week, represented by strong winds and sandstorms.

In the details, it is expected that the kingdom's airspace will cross a cold air mass coming from the north, in conjunction with the effect of other hot masses on the north and center of the kingdom, which will push, after God's will, strong-speed winds towards all regions of the north, middle and east of the kingdom, and the east of the kingdom, some of its gifts reaching the limits of 100 km / hr , and these winds are capable of forming wide dust waves with a significant decrease in the horizontal visibility.

Areas most affected by sandstorms and dust waves

As for the areas most affected by sandstorms and dust waves, they are all of Al-Qassim, the eastern region, and the general area of Riyadh, as it is expected that the tidal waves in these areas will be dense and strong and rise to the degree of a sandstorm, and the horizontal visibility in them may decrease to the point of absence in some parts, especially on External roads.

Al-Jawf, the northern border, and Hail come in the second place in terms of strength, as these areas are expected to witness strong winds accompanied by strong dust waves that significantly reduce the horizontal visibility. Meanwhile, Najran will be moderately affected by this dust wave, and God knows best.

Important | ArabiaWeather warns of a strong sandstorm that affects 10 Arab countries at the end of the week, from here

Important reasons may make the expected sandstorm at the end of the week the strongest since the beginning of the season, from here

Saudi Arabia | Serious warnings to land-goers and sandstorm enthusiasts over the weekend, from here