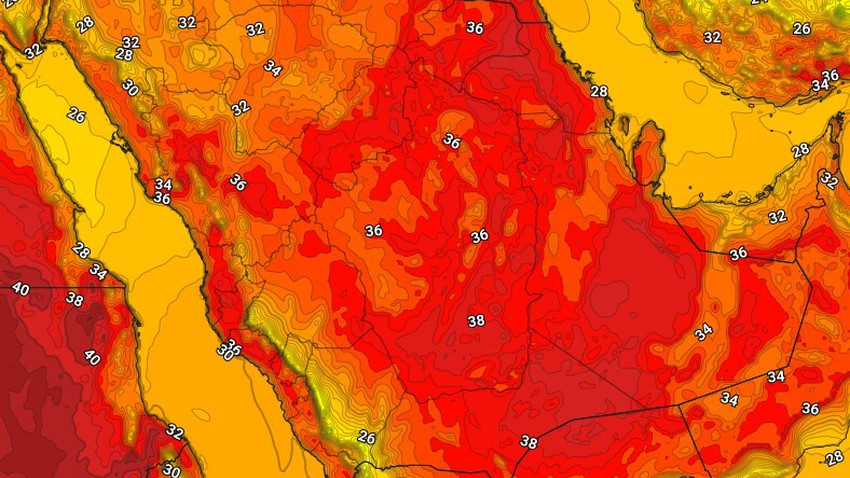 Arab Weather - The Arab Weather website for meteorology and weather forecasts reveals the expected weather in all regions of the Kingdom of Saudi Arabia during the hours of Morocco from today, Tuesday 11/5/2021, and it is expected "God willing" that the weather will be hot in all regions of Saudi Arabia during the period of the investigation of the crescent of Eid Al Fitr Al-Saeed, and temperatures range between 32 and 40 degrees Celsius, and in the southwestern mountain highlands, the temperature ranges between 22 and 28 degrees Celsius, while in the capital, Riyadh, the expected temperatures are around 36 degrees Celsius.

Will the weather be clear during the Eid al-Fitr investigation period in Saudi Arabia?

According to the latest output of numerical models through the Badr System for Numerical Weather Prediction Models (the first Arab system for weather forecast models developed in the Arab Weather Corridors), quantities of clouds are expected to spread at medium and high altitudes throughout Saudi Arabia, which will negatively affect the investigation process due to the lack of clarity of the atmosphere.

The opportunity is ripe at a time when the happy Eid al-Fitr crescent is investigated in Saudi Arabia to the development of thunder clouds on separate parts of the northern regions, specifically the borders with Iraq and Jordan, causing showers of rain, and thunder clouds are associated with the blowing of downward winds if they occur, which will cause dust waves to occur in Within the range of thunderclouds.

The winds are westerly to southwesterly moderate in speed and accompanied by active gusts of dust in the northern and western regions during sunset hours, while in the rest of the regions the winds are fluctuating in direction and light to moderate in speed, sometimes active in some areas and working to stir the dust in a limited way.