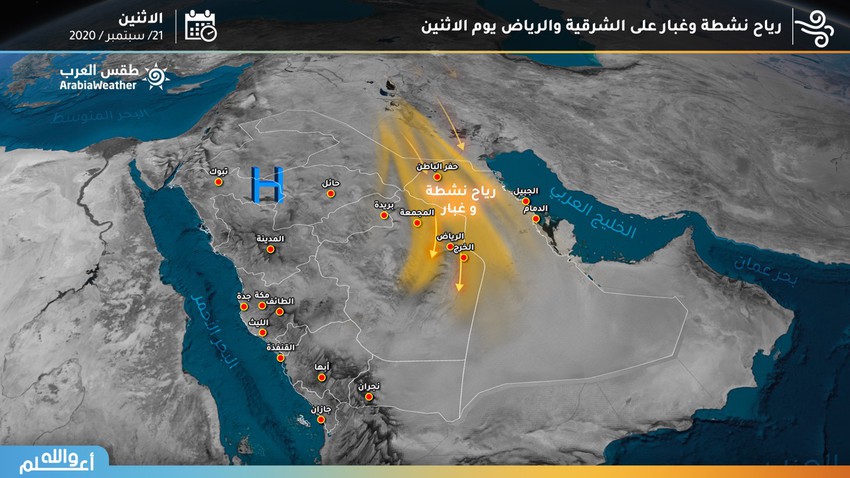 Arab Weather - Sinan Khalaf - It is expected that some central and eastern parts of the Kingdom will be affected by dusty weather on Monday due to the activity of the northern winds that are exciting for dust and dust, and their impact includes both Hafar Al-Batin and the capital, Riyadh.

Dust between medium and dense in Hafar Al-Batin

And our latest weather forecasts in Arab weather indicate that the northern winds began activity on the eastern Iraqi lands in the afternoon hours of Monday, to move quickly towards the Hafar Al-Batin area, and it carried with it large quantities of dirt and dust, between medium and dense, which will reduce The horizontal visibility is remarkable.

These winds and the dust and dust they will carry with them are expected to move towards the south to affect the capital of Riyadh, in the form of medium-density dust, accompanied by a decrease in the horizontal visibility.

These winds have many negative effects, especially on patients with respiratory system and eyes, as a result of their striking dirt and dust, which requires them to follow the necessary preventive measures to prevent health complications, God forbid, and it also requires drivers to be careful while driving on the roads in the event of a decrease in the horizontal visibility By dust.

Saudi Arabia | An earthquake of magnitude 3.1 Richter was felt by residents of Abha and Khamis Mushait

Tabuk | Weather turbulence and chances of rain on Sunday and Monday