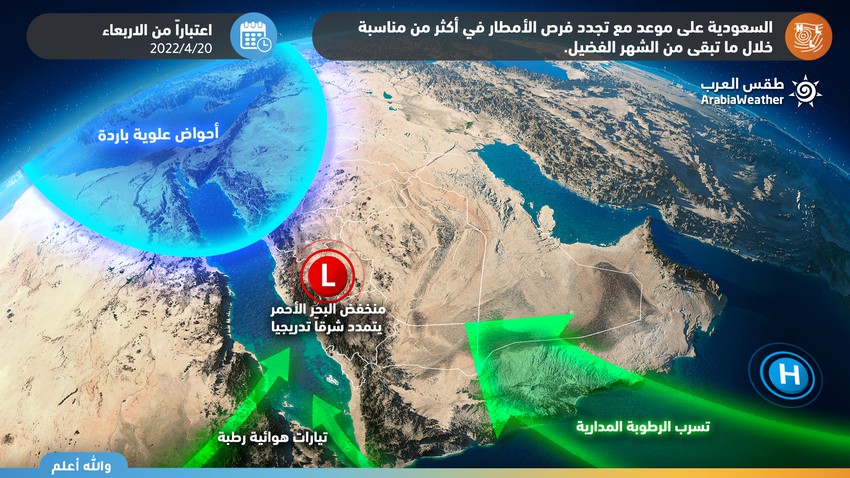 Weather of Arabia - After reviewing the results of analyzes and computer simulation data for weather forecasts, we can say that Saudi Arabia is on a date with a renewal of rain opportunities in the Kingdom, starting from the end of this week, and extending its opportunities at different periods during the remainder of the blessed month of Ramadan, at least, God willing. This makes this period an auspicious period to improve the rainy reality, which suffers from great weakness.

Weather forecasters at the Arab Weather Center for Meteorology and Weather Forecasts said that the weather system will witness a drastic change in the northern hemisphere, where it is expected that atmospheric pressures will rise in important areas of the Arctic during the coming period, resulting in a deepening of the jet streams towards the peninsula region. It displaces the air pressure perched over the atmosphere of the Arabian Peninsula, and here emerges the possibility that several parts of the Arabian Peninsula, including the Kingdom, will be exposed to unstable weather conditions, especially with warm and humid air currents blowing from tropical widths, and a superficial response to the Red Sea depression clearly and effectively. 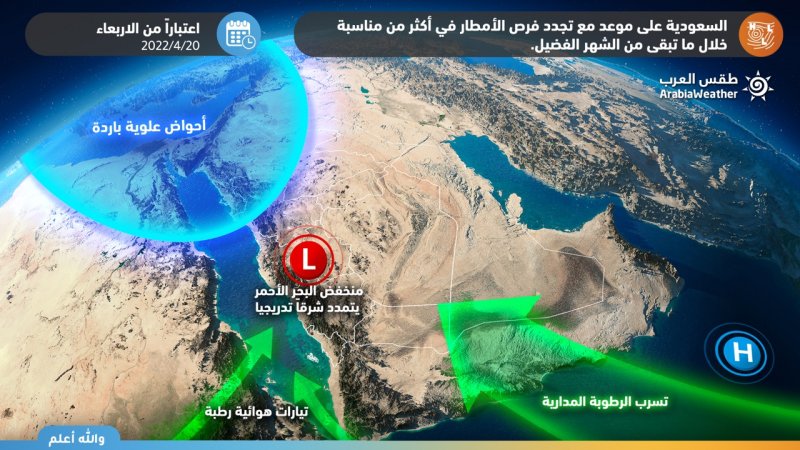 And emerging to the fore, the western and central sectors of the Kingdom, in particular, were renewed at the end of this week by atmospheric disturbances resulting from a combination of a shallow drop in atmospheric pressure and a dynamic contribution to the vertical thermal difference and a superficial response as well to the Red Sea depression effectively, which also works to provoke warm and humid air currents From tropical shows, and according to this possibility, the chances of parts of western and central parts of the Kingdom being exposed to unstable weather conditions are increasing, represented by the increased chances of thunder showers of rain accompanied by downward winds that raise dust and dust.

These cases are distinguished during this period of the year specifically from other conditions of atmospheric instability by moving away from the bases of cumulus clouds from the surface of the earth, as a result of the drying of the lower layers of the atmosphere from the atmosphere, and this means the evaporation of part of the rain before it reaches the surface of the earth, which leads to the occurrence of cooling / A decrease in the temperature inside the cloud, so the air density rises, and it becomes heavier in weight compared to the surrounding air. Dense, especially in desert areas.

Despite the remoteness of the time period, at which time the weather forecasts are less accurate, the weather forecast cadre in Arab weather looks optimistically for the upcoming period, as the numerical simulation of the atmosphere indicates that the opportunity is favorable for more weather conditions, which may be more mature and comprehensive, during the last week of the month Current (around 24 April). It is not possible to deduce all the details from now on for that period, but it is clear until the time of writing this report that there will be more rains on Saudi Arabia, which may include new areas, in light of expectations of a low air depth in the upper layers of the atmosphere towards the northwestern parts of the Arabian Peninsula and the occurrence of The leakage of air currents saturated with tropical moisture, in conjunction with the rise in temperatures, which contributes to the ignition of cumulus clouds.

All of the above is within the context of the forecasts of the latest weather readings issued by the Arab Regional Center for Meteorology and Weather Forecasting, bearing in mind that these forecasts are considered medium to long-term and are constantly changing, especially during this (transitional) period, which is known for the low accuracy and inability of computer models to simulate the expected atmospheric system on Accurate grammar, so updates will be released that will highlight more details incrementally as needed, God willing.