Saudi Arabia | Jeddah, Yanbu, Rabigh and Umluj under the influence of Saba winds and dust on Thursday 03-17-2022 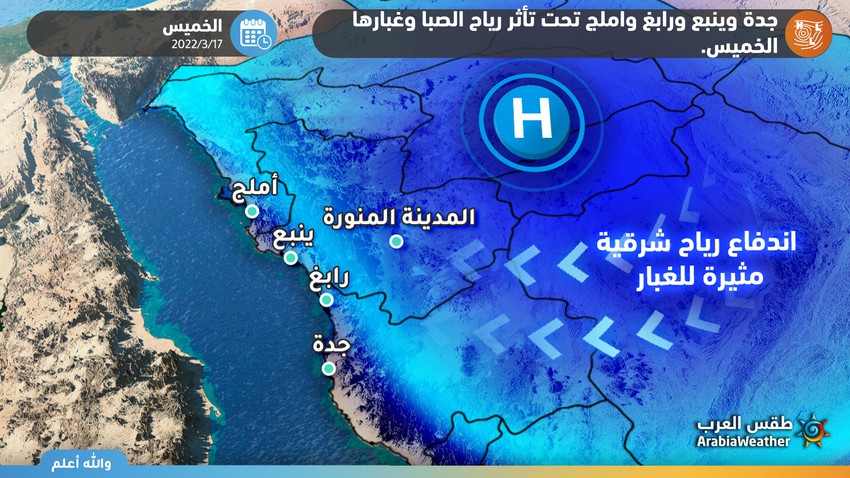 Weather of Arabia - It is expected, God willing, that the Saba winds will activate again on Thursday, and as usual, they will affect large parts of Jeddah, Yanbu, Rabigh and Umluj, all the way to the southern parts of Al-Wajh governorate of the Tabuk region.

In the details, Jeddah, Yanbib, Rabigh and Umluj are affected Thursday 17-03-2022 by the blowing of the Siba winds, and it is expected that they will stir up dust and dust in varying degrees from one region to another, especially the northern parts of Jeddah in particular, which will reduce the extent of Horizontal visibility, especially on outdoor roads.

The Saba winds are easterly to southeasterly winds, which are expected to blow as a result of the control of a cold, superficial air mass over large parts of northern and central Saudi Arabia, which works to control a shallow air rise over those areas, and because of the high density of cold air, it rushes west towards the Hijaz Mountains. The Hijaz Mountains act as a barrier that prevents the cold air from moving west towards the Red Sea. The cold air does not find its way to the west except through the corridors between the mountains, and consequently its speed increases and it rushes towards the coastal areas, which works to raise dust.