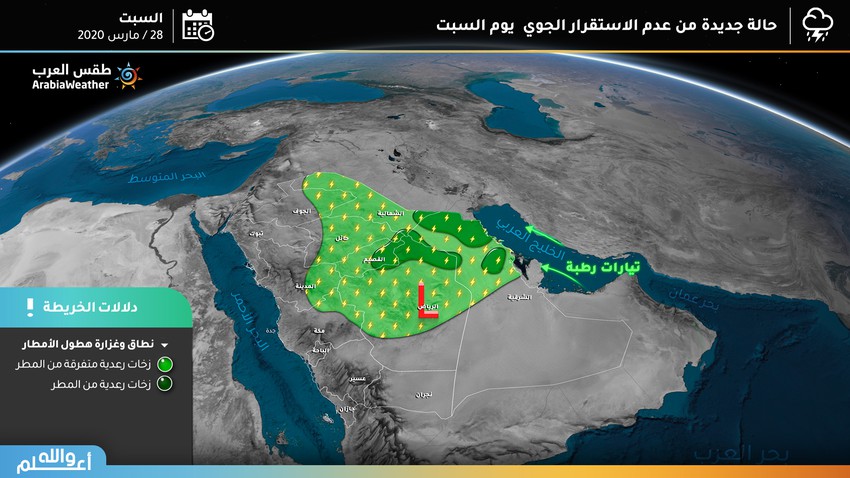 Saudi Arabia More rains in Riyadh and many areas on Saturday

Weather of Arabia - On Saturday, with the will of God, there is a renewed state of air instability in the northern, central and eastern regions of Saudi Arabia, and thunderstorm clouds abound and thunder showers of rain occur in many areas including the capital Riyadh.

On Saturday, the Red Sea depression is concentrated on the northeast of Saudi Arabia, and it drives wet southeast currents from the Arabian Gulf, where thunderstorm clouds abound throughout the northern, central and eastern regions, including the capital Riyadh, where the opportunity is ripe for thunderstorms to rain from the capital with Saturday evening hours.

The intensity of the rain will be generally mild, moderate in the limited ranges, especially in the northeast of the Kingdom and parts of Hail, Qassim and east of Riyadh.

Active winds and dust waves in many regions

With the Red Sea deposition centered in the northeast of the Kingdom, the southeast wind is active on the Tihama region of Makkah, where a wave of dust arises on that region on Saturday and the horizontal visibility decreases significantly, and the chance of dust includes Makkah and parts of Jeddah city.

Western winds are also active in the Al Madinah Al Munawwarah region, west of Riyadh, Qassim and Hail, where the opportunity is ripe for a wave of dust to arise there.

Jeddah this week Stable weather and consecutive altitudes over temperature

Saudi Arabia Showers and thunderstorms expected on Sunday in the mountains of Jizan, Asir and Al Baha

Update 5:15 PM | Rising opportunities for rain on the capital, Riyadh, for the coming hours

Update 4:30 PM | A wave of dust rushing towards the capital, Riyadh, for the coming hours