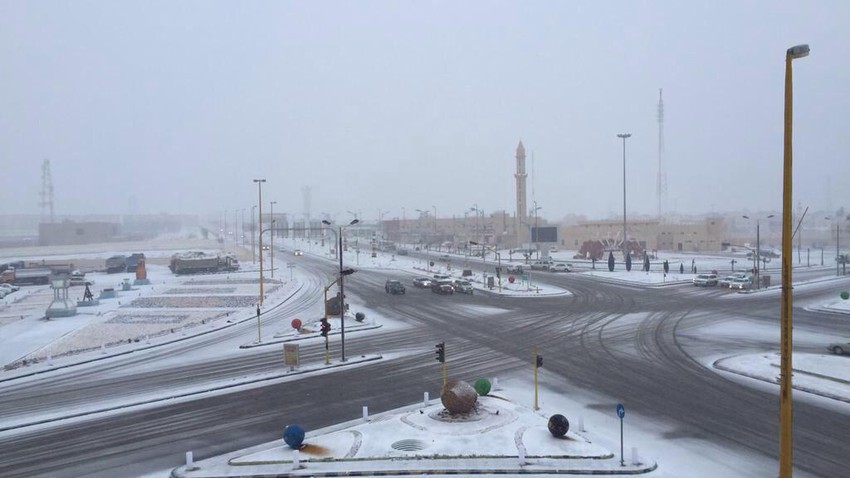 Arab Weather - Forecasters at the Arab Weather Center say that snow showers may fall on Monday / Tuesday night until the late hours of Tuesday morning on the highlands of Turaif and northern Arar, and they added that a flow of very cold polar winds was monitored from the eastern European continent towards the northern parts of Saudi Arabia. Passing through the Levant, which is expected to increase its momentum on Monday/Tuesday night, God willing.

In the details, the computer modeling developed in the Arab Weather Center indicates expectations, God willing, that the flow of polar winds will coincide with the flow of wet currents from the west. This convergence between the two air systems leads to snow falling in the collision areas, and the computer processing outputs also indicate through numerical modeling of the movements of the blocks. Aeronautics indicated that the potential collision areas during the evening and night of Monday / Tuesday until the morning hours of Tuesday, on which snow is likely to occur, include:

2) Limited parts of the Jalamid Highlands (North of Arar)

3) Limited parts of the road connecting between Tarif and Arar

Forecasters added that it is not possible to know whether snow accumulations will occur in these areas as a result of snowfall, but there will be a field follow-up of the weather situation on the go to find out this, and it should be noted the importance of following up on the places where a collision may occur due to the possibility of its change.

This and God knows.