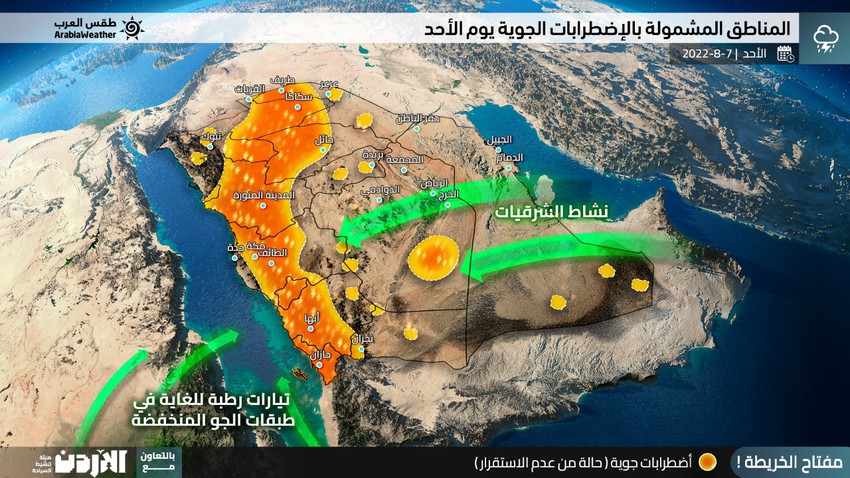 Weather of Arabia - The latest weather forecasts extracted from the outputs of the so-called computer simulations indicate an expected continuation of atmospheric turbulence over large parts of western and northwestern Saudi Arabia during the coming days. Where the Eastern Provinces prevail during the summer months, and as a result of the control of those winds, thunder clouds that form on the heights with the noon and afternoon hours, rush towards the west (unlike the autumn and winter months), and thus their impact includes the Tihama and some coasts with varying intensity from one day to another, similar to the days the last few.

According to the latest weather maps, it is expected that huge amounts of tropical water vapor will continue to flow into the western highlands of the Kingdom on Sunday, so that local formations will renew with noon hours on the heights of the southwest of the Kingdom, represented by the highlands of Jazan, Asir, Al-Baha, and southern Makkah. . Gradually, with the passage of Sunday hours, the range of formations expands to the north to reach the heights of Medina and Tabuk, some of the heights of Hail and Al-Jawf, and perhaps the northern borders, the areas of Turaif Governorate and limited parts of Al-Qassim, coinciding with the intensification and expansion of local formations on the southwestern heights and the Makkah Al-Mukarramah region. Geographical ranges and associated with hail, which may cause the formation of so-called sudden torrents in low areas, slopes, valleys and reefs.

And due to the blowing of the Sharqiyat (which are easterly winds in the middle and high layers of the atmosphere), this means that the cumulus and thunder clouds that formed over the mountains earlier on Sunday, will find their way to the western slopes and perhaps the coasts sometimes, to extend the chances of rain during the evening and night to some coasts of Jizan and Asir and Medina, and it is not excluded that thunder clouds will extend towards Mecca to include Arafat, Mina and Muzdalifah, as part of those thunderstorms extend towards the Great Mosque of Mecca.

Thunderstorms are expected daily on the western sector this week

Weather forecasters at the Arab Weather Center said that weather disturbances will continue, God willing, along the western sector of the Kingdom on a daily basis during the current week. So that the chances of rain remain in separate parts of Najran and the Empty Quarter with the formation of cumulus formations during noon and afternoon on the heights and Tihama of Jizan, Asir and Al Baha, in addition to the heights of Makkah. And heavy at times and accompanied by the occurrence of thunderstorms and cause the flow of valleys and the formation of torrents in a way that may be dangerous sometimes, in addition to being preceded in many cases by a great activity in the speed of the winds that may cause the formation of local dust storms. The rain also extends randomly to separate parts of Medina and Tabuk, and to a lesser extent to parts of Hail, Qassim, Al-Jawf and the northern border, which need immediate and vigorous follow-up via satellites and computer simulation models on a daily basis.

The Kingdom’s impact on these unstable weather conditions comes in light of the exceptional deepening of the monsoon winds in the Kingdom’s airspace, and many data indicate that the chances of so-called sudden torrential rains during the period of the effect of cumulus clouds increase. This condition is also associated with thick cumulus thunderstorms, which means that there is a high chance of the occurrence of the so-called severe downward winds that lead to temporary sandstorms, in addition to the occurrence of lightning and lightning.

Based on the above, there are a number of important recommendations that must be taken seriously during the impact of unstable weather conditions, including: