Saudi Arabia: The areas covered by the rain forecast in the Kingdom on Monday 8-8-2022 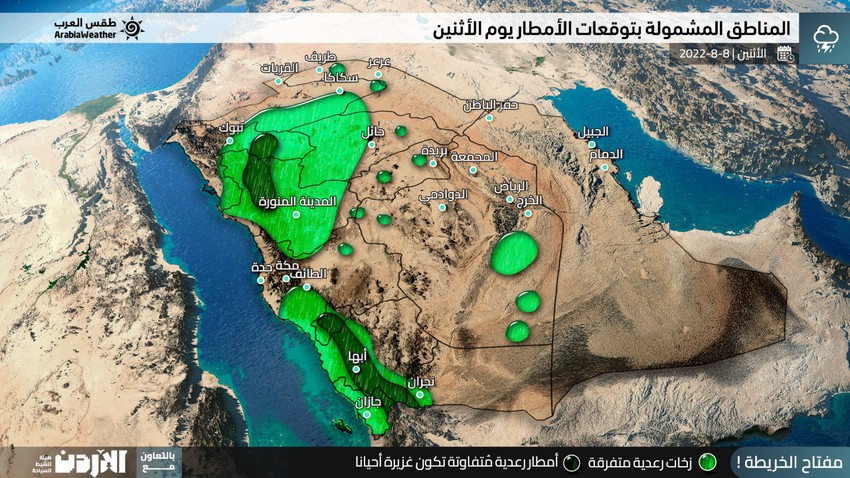 Arab Weather - Weather forecasters at the Arab Weather Center reported that the rainy weather affecting the western sector of the Kingdom for several days is expected to continue on a daily basis during the current week, God willing. So that the impact of weather disturbances will be renewed on Monday 8-8-2022 in the highest scattered parts of the west and northwest of the Kingdom, causing thunderstorms that will be heavy in some parts, God willing.

As indicated by the outputs of the computer modeling developed by Arab Weather , it is expected that tropical water vapor will continue to flow to the western highlands of the Kingdom, which means the proliferation of thunder clouds during the afternoon and evening and showers of rain in parts of the southwestern sector of the Kingdom, including the highlands of Jazan, Asir and Al Baha. And south of the Holy Makkah region, and it is not excluded that the chances of rain will affect the city of Taif, and the chances of rain include parts of several parts of the Medina area, and random areas of Tabuk, Hail and Al-Jawf, and to a limited extent Al-Qassim. The southwest sector, in addition, is often preceded by a very active wind speed that may cause the formation of local dust storms. 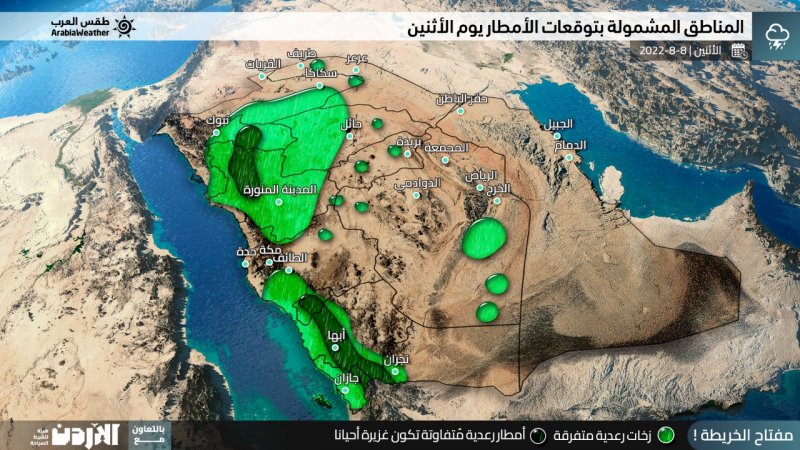 It is expected that the weather disturbances will continue, God willing, along the western sector of the Kingdom on a daily basis during the current week, so that the chances of cumulus formations remaining during the noon and afternoon periods on the heights and Tihama of Jazan, Asir and Al Baha, in addition to the heights of Makkah, especially the south of the region, and the rain extends randomly to parts of the region. Scattered from Madinah and Tabuk and to a lesser extent to parts of western Hail and southwestern Al-Jawf, which need immediate and vigorous follow-up via satellite and computer simulation models on a daily basis.