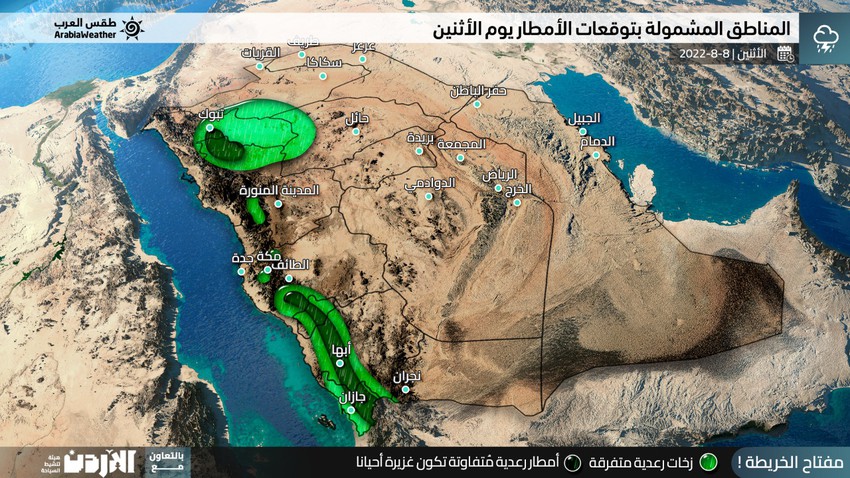 Arab Weather - Specialists in the Weather Operations Department at the Arab Regional Weather Center for Meteorology and Weather Forecasts have reported expectations of the continuation of the impact of weather disturbances on Tuesday 8-9-2022 on parts of the west of the Kingdom. According to the center, it is expected that cumulus thunderstorms will renew in the afternoon and evening hours, with rain of varying intensity, accompanied by thunder sometimes.

As for the areas covered by rain, the computer modeling outputs developed by Arab Weather indicate that thunder clouds will develop during the noon and evening period on parts of the southwestern sector of the Kingdom, including the heights of Jazan, Asir, Al Baha and various parts of the Makkah region, especially the southern ones. It also includes rain opportunities. Parts of the Medina area, especially the northern ones, in addition to Tabuk, and to a limited extent, Al-Jawf and Hail. The rains are of varying intensity and are sometimes accompanied by thunderstorms, in addition to that they are often preceded by a great activity in wind speed that may cause the formation of local dust storms. 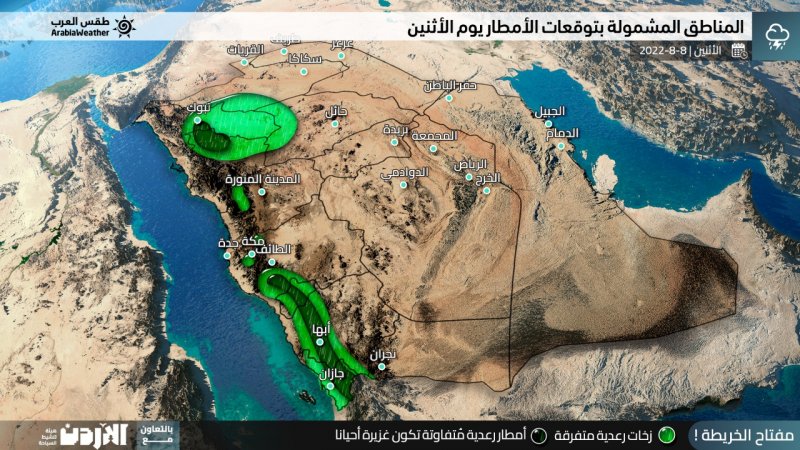 It is expected that the weather disturbances will continue, God willing, along the western sector of the Kingdom on a daily basis during the current week, so that the chances of cumulus formations remaining during the noon and afternoon periods on the heights and Tihama of Jazan, Asir and Al Baha, in addition to the heights of Makkah, especially the south of the region, and the rain extends randomly to parts of the region. Scattered from Medina and Tabuk, and to a lesser extent to parts of western Hail.