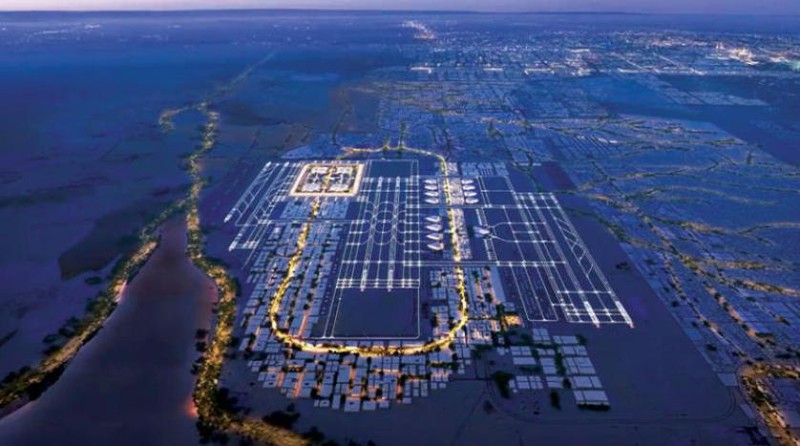 His Royal Highness Prince Mohammed bin Salman bin Abdulaziz Al Saud, Crown Prince, Prime Minister, Chairman of the Council of Economic and Development Affairs and Chairman of the Board of Directors of the Public Investment Fund, announced the launch of the master plan for King Salman International Airport, to make Riyadh a gateway to the world, a global destination for transport, trade and tourism, and a bridge It connects the East and the West, which establishes the Kingdom's position as a global logistics center.

The new airport will contribute to supporting the Kingdom's plans for Riyadh to be among the ten largest city economies in the world, and to keep pace with the continuous growth in the population of the capital, Riyadh, which aims to reach between 15 and 20 million people by 2030.

King Salman Airport will be one of the largest airports in the world, and will extend over an area of approximately 57 km², which includes the current terminals under the name of King Khalid Terminals, 6 runways, in addition to 12 km² of support facilities, residential and entertainment assets, shops, and many other airports. logistics facilities.

Residential, recreational and commercial facilities will be implemented, according to the best innovative standards, with designs that mimic the Saudi culture, to provide a unique travel experience with smooth, efficient and effective services for visitors and travelers.

King Salman International Airport places sustainability among its priorities, as it aims to obtain LEED Platinum certification for environmentally friendly projects, and it will be supported by renewable energy resources.

The announcement of the master plan for King Salman International Airport comes in line with the Public Investment Fund’s strategy that focuses on unlocking the potential of promising sectors, real estate projects and infrastructure development projects locally, and in line with the national strategy for transportation and logistics services and the national initiative for global supply chains, and supporting the Kingdom’s efforts to diversify the economy. The project is expected to contribute about 27 billion riyals annually to the non-oil gross domestic product, and to create 103,000 direct and indirect job opportunities to contribute to achieving the goals of the Kingdom's Vision 2030.