Saudi Arabia: The effect of the summer rain situation (tropic 22) on the west of the Kingdom will continue in the coming days 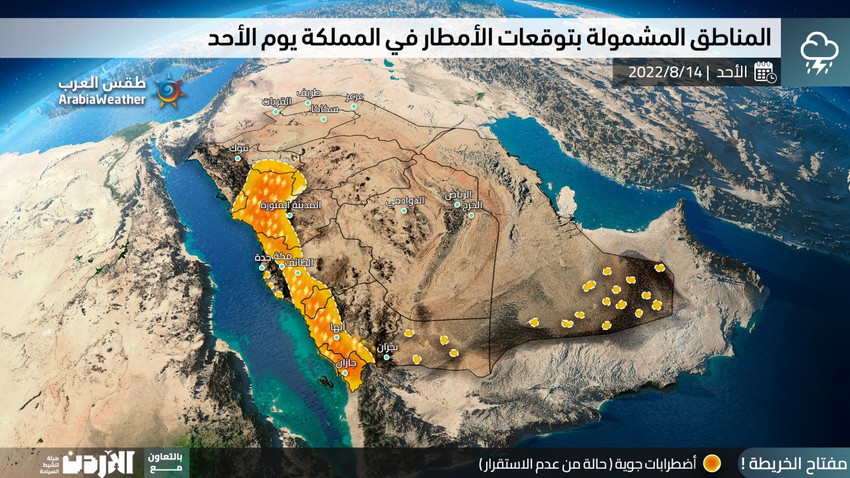 Weather of Arabia - The latest weather forecasts extracted from the outputs of the so-called computer simulations indicate an expected continuation of thunderstorms in parts of western Saudi Arabia during the coming days, resulting from the unstable weather conditions that cause this rainy state called (orbit 22).

In the details, it is expected, God willing, that the western sector of the Kingdom will be affected by unstable weather conditions on Sunday 8-14-2022, so that rain opportunities remain in separate parts of Najran, the Empty Quarter and southwest of Riyadh administratively, with the formation of cumulus formations during the afternoon and evening on the highlands. Jazan, Asir and Al Baha, in addition to the heights of Makkah, and the rain may extend to include Taif and the holy sites in the evening and night hours, and the chances of rain extend randomly to parts of Medina, southern Tabuk, and western Hail and Qassim regions. In addition, they are often preceded by very active wind speed that may cause local dust storms to form. 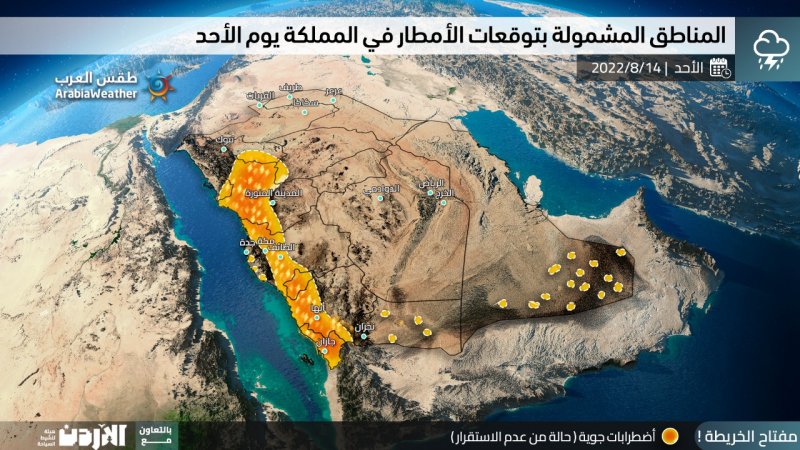 It is expected that weather disturbances will continue, God willing, along the western sector of the Kingdom on a daily basis during the next few days, so that the chances of cumulus formations remain during the noon and afternoon periods on the heights and Tihamah of Jazan, Asir and Al Baha in addition to the heights of Makkah, and the rains extend randomly to separate parts of Medina and Tabuk.

Indications of the intensification and expansion of rain this weekend

According to the latest weather readings, computer indicators indicate the flow of tropical moisture resulting from the remnants of the tropical depression to the western sector of the Kingdom during the weekend, so that the weather disturbances will intensify in the western sector of the Kingdom, to include large parts of Najran and the highlands and Tihama, Jizan, Asir and Al Baha, in addition to the highlands And the rain may extend to include the sacred feelings, and the rains are of varying intensity and are sometimes heavy and accompanied by the occurrence of thunderstorms and cause the flow of valleys and form torrents in a way that may be dangerous sometimes in addition to that it is often preceded by a great activity in wind speed that may cause the formation of dust storms local. The same readings indicate expectations that thunderstorms will extend to separate parts of the Empty Quarter, Medina, Tabuk, and the northwest of the Kingdom.