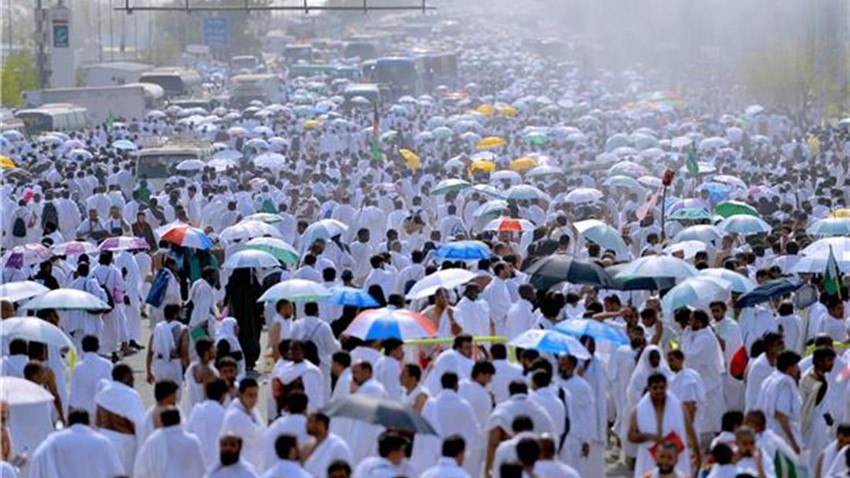 Weather of Arabia - Saudi Arabia has developed an integrated strategy to mitigate the repercussions of high air temperatures on the pilgrims during the performance of Hajj 2022.

Hot weather dominates the holy sites during the Hajj season

The latest forecasts issued by the weather forecast cadre in the Arab weather indicate the dominance of a stable atmosphere in general and the survival of the weather in general hot in all parts of Makkah Al-Mukarramah and the holy sites, with temperatures within their usual rates for this time of the year, which are between 42-44 degrees Celsius. .

Saudi measures to reduce the heat for pilgrims

1. Soothes the atmosphere and cools the water

Saudi Arabia has not only softened the atmosphere inside the Grand Mosque, but the air conditioning system in the Grand Mosque provides it with cool air purified by 100% of germs, through two main stations, which are the largest in the world. Cooling systems in the world, and pumps its energy from the two plants "Keddi and Al-Shamiya", and the energy produced by the Shamiya plant is estimated at 120 thousand refrigeration tons, and it is 900 meters away from the Grand Mosque, while the Ajyad plant has a production capacity of 39,000 refrigeration tons. It is (500) meters away.

The coolers of the two stations work by cooling the water between 4 to 5 degrees Celsius, and pumping it through pipes to the Grand Mosque, and then to the air handling units in the mechanical rooms; The heat exchange process takes place, then the cooled fresh air is pushed around the Grand Mosque.
The agency renovated and developed air handling units, replaced all heat exchangers with new ones, and changed all air purifier filters periodically.

The air is purified through air handling units after natural air is withdrawn from the surface of the Grand Mosque, and this is done in several stages, through efficient filters and high filtration technology, which prevents the passage of dust particles and small particles into the air conditioning environment, then it is sterilized with ultraviolet rays that kill Bacteria and germs, so that the air in the chapels of the Grand Mosque is free of germs and viruses.

While the General Presidency oversees the operation and maintenance of these systems, temperature control, maintenance of required humidity, and follow-up of the operational status around the clock, technicians work to balance the air in the different spaces of the Grand Mosque, depending on the numbers and density of visitors.

Over the past period, the Presidency of the Two Holy Mosques has distributed sunshades to pilgrims and workers in the Grand Mosque to protect them from the sun's rays and heat while performing their rituals, as part of an initiative entitled "The Two Holy Mosques".

In turn, the Ministry of Islamic Affairs, Call and Guidance is active in distributing sun umbrellas and water-cooled packages to pilgrims. 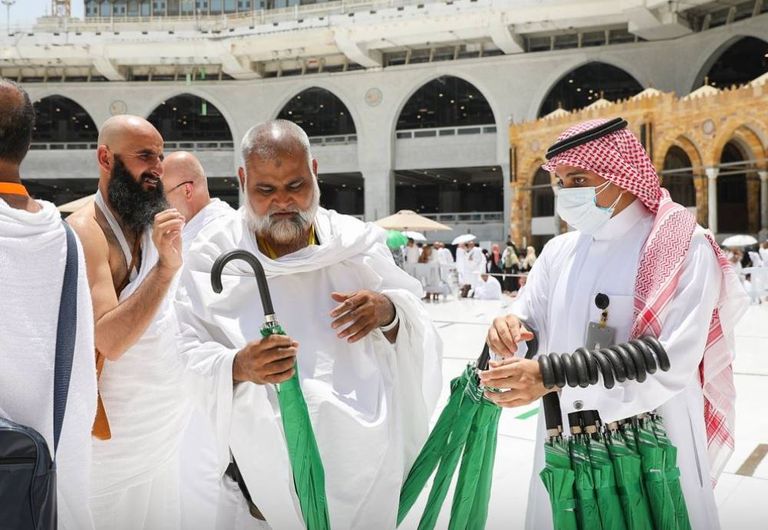 3. Awareness of heat diseases and sunstroke

The Saudi Ministry of Health has intensified its awareness efforts on more than one path to raise awareness of thermal diseases during the Hajj season, either through its accounts on social networking sites, its website, or applications related to Hajj.

The ministry stressed the importance of avoiding constant exposure to the sun, warning that it may lead to heat stroke, which negatively affects the completion of the Hajj rituals, and advised pilgrims to avoid exposure to the sun and use an umbrella.

The ministry also launched the "Guide for Hajj Pilgrims with Health", which included adequate information on health damages resulting from continuous exposure to sunlight, prevention methods, and treatment methods.

In this regard, she noted that heat stroke is a life-threatening disease, usually associated with an uncontrolled rise in core body temperature of more than 40 degrees Celsius, and central nervous system dysfunction, such as: delirium, convulsions, or coma. The most important causes of heat stroke are exposure to high temperatures, high humidity, or exposure to great physical stress.

The Saudi Health confirmed that heat stroke is a medical emergency that must be treated as soon as possible through the following:

The Saudi Ministry of Health defined heat stress as the depletion of fluids and salts from the body due to profuse sweating, and not drinking enough water and juices. She advised pilgrims to do a number of things to avoid heat stress , including:

It indicated that the areas in which thermal injuries are frequent are:

As part of its preparations for the Hajj season of this year 1443 AH, the Saudi Ministry of Health has prepared, in Makkah Al-Mukarramah, the Holy Sites and Al-Madinah Al-Munawwarah, (25) hospitals, supported by (156) health centers, with a bed capacity of (5000) beds, of which (1053) beds were allocated for intensive care. And (241) beds were allocated for sunstroke, and the number of health cadres qualified to serve the pilgrims of Rahman reached about (25) thousand health practitioners.

The Ministry indicated that the treatment services include cases of heat stress, and the rest of heat-related diseases, which are expected to occur this year, as the hospital has set up a specialized center for heat strokes and heat stress, in order to meet the expected cases during the Hajj season this year, as a result of high temperatures, in the Holy Capital. And feelings, stressing that this center is the first at the level of Makkah Al-Mukarramah hospitals, which works under the supervision of the emergency department to receive patients with heat stress and heat strokes 24 hours a day.