Scientifically, why is the polar mass currently affecting the kingdom associated with an incomplete air system? Arab weather - The Kingdom is affected on Tuesday 15-03-2022 by a cold polar air mass accompanied by a cold upper basin, which leads to weather fluctuations, including the chances of rain showers in random areas, in addition to the chances of intermittent snowfall over the mountainous heights, which include Parts of major cities. Perhaps the most prominent question is, what prevented the widespread snowfall in Jordan and its accumulation, despite the arrival of cold air of polar origin to the region.

Unlike previous reports, this report focuses on scientific analysis, explanation of weather maps, and clarification of the reasons that prevented the Kingdom from being affected by an integrated air system.

Atmospheric disturbances that occur in high levels of the atmosphere are the direct cause of the formation of most waves of warmth and cold and accompany the depressions and upper air altitudes around the world, and they are driven by God’s command as a result of the behavior of those upper winds that rise from the surface of the earth thousands of kilometers and roam the globe at the speed of hurricane winds . These upper disturbances occur as a result of a complex binary relationship that occurs between the stratosphere and the troposphere, and this relationship is represented in the crystallization of the ritual system on the lower and lower layers of the atmosphere.

What are the characteristics of an integrated air system?

Shortly after the formation of the upper atmospheric system that we mentioned earlier, based on the behavior and axis of its thrust from the region, weather phenomena are formed on the surface of the earth, where the region to the left of the basin axis in the upper layers of the atmosphere witnesses an upper air collection area, the air density increases compared to the surrounding medium and the air begins As a result, a superficial rise characterized by coldness was formed to the west and northwest of the upper basin axis. 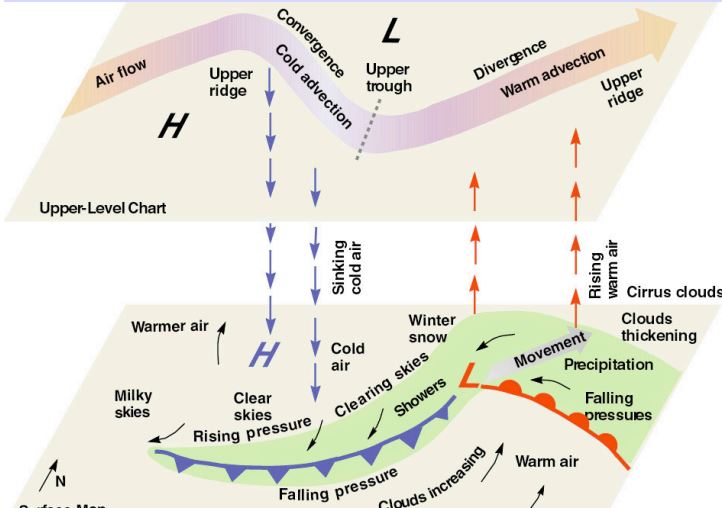 In our case, because of the dry behavior of the upper cold basin, and the cold air not deepening into the upper layers of the atmosphere towards Jordan, but rather concentrating it in the north of the Levant, so that the kingdom becomes to the left of the upper cold basin axis, and one of its consequences is the inability of the upper depression to form an area Lower accumulation of winds on the surface (a shallow depression) close to the Kingdom, and this also leads to the accumulation of cold polar air in the low and middle layers of the atmosphere, high surface pressure values, and the inability of the air to build clouds in a strong and effective way.

This is because the surface depression is considered a mechanism, one of the most important lifting mechanisms for the formation of rain clouds, which move the air upwards, giving greater kinetic energy, releasing potential energy, and consequently a large upper movement of the wind. Subsequently, thicker vertical clouds are formed, and then the generator works to create rain and snow precipitation. 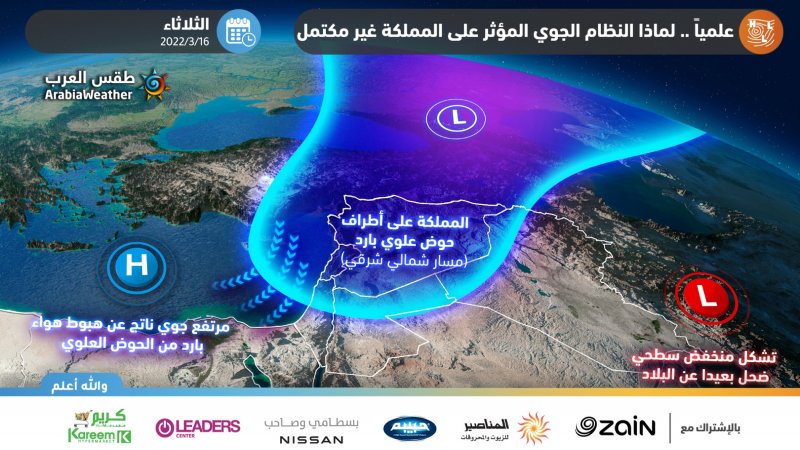 The numerical simulation of the rain precipitation developed in the Arab Weather Center sensed that, indicating that the precipitation in Jordan will be characterized by random and geographical irregularity in the rainfall in the absence of a major superficial low system as we mentioned earlier, which prompted the weather forecast staff in Arab Weather not to classify the affecting situation on the kingdom.

These random-scale rains are caused by the command of God from the movement of the upper basin itself to raise the air to the top and cause random rains to fall and form (layered) clouds in most of them. Scientifically, this mechanism of precipitation is known as (dynamic rain). This is in contrast to air depressions with air fronts, in which instability is high in the atmosphere, through which clouds are formed regularly and sometimes comprehensive, where rain clouds usually start arriving from the Mediterranean towards the north of the Kingdom and extend to the rest of the regions successively.