scientifically | Why is the upcoming weather condition considered a state of atmospheric instability and not an air depression? 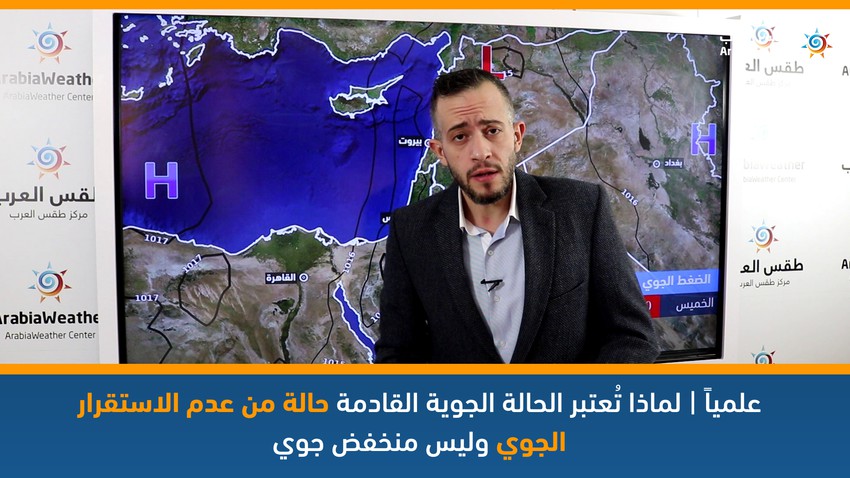 Arab Weather - The Kingdom is affected from Friday 11/19-2021 until Sunday evening 11/21-2021 by a state of atmospheric instability that causes weather fluctuations, including chances of thundershowers of rain in random areas, some of which may be heavy In some narrow geographical areas, which may cause the flow of valleys and possibly sudden torrential rain.

The scientific reason is that the specialists in the Arab Weather Center considered the upcoming weather situation as a "state of atmospheric instability" in its impact on Jordan, although there is also an air depression in the eastern Mediterranean Sea is that the decline of a cold and humid air mass in the upper layers of the air towards The eastern Mediterranean region and the Levant provoke the Red Sea depression by extending to the north, generating with it a state of atmospheric instability affecting Jordan and parts of northern Saudi Arabia in addition to the Levant desert, meaning that the system affecting Jordan will be a sub-system resulting from the confluence of the extension of the sea depression Red and it coincides with the presence of the cold air mass, while there is also a shallow air depression that forms in the eastern Mediterranean (it is also associated with the Red Sea depression), but it is centered far from the Kingdom, and does not affect Jordan directly. In meteorology, this weather condition is called a composite condition or a composite condition, and it is part of the Kingdom's climate, where Jordan is frequently affected by such conditions.

This scientific assumption also confirms the numerical simulation of the expected rainfall during the next three days, as it indicates that the precipitation in Jordan is characterized by random and geographical irregularity in rainfall, which will also be thunder, and this does not prevent that some areas are exposed to heavy rain and hail for some The times, which increases the possibility of the flow of valleys and reefs, and perhaps the formation of sudden torrents.

The same numerical simulation also indicates that the rainfall is not characterized by continuous continuity, as is the case with atmospheric depressions, but rather the weather will be very volatile from time to time and from one region to another.

The importance of defining the expected air system lies in the fact that the interaction of people and different parties varies between depressions and cases of atmospheric instability. For example, in cases of atmospheric instability, everyone must pay attention and be prepared for the dangers of local torrential rains and sudden torrential rains that come with sudden weather fluctuations.

In the end, no matter how many reasons and explanations there are, we pray to God to give us rain and not make us despondent, as we are in dire need of any rain in light of the interruption of rain that occurs in our areas.

The Governor of Tafileh decides to disable all government departments on Thursday, except for those whose work nature requires otherwise

Precautionary closure of bridges in the capital, Amman, due to the freezing