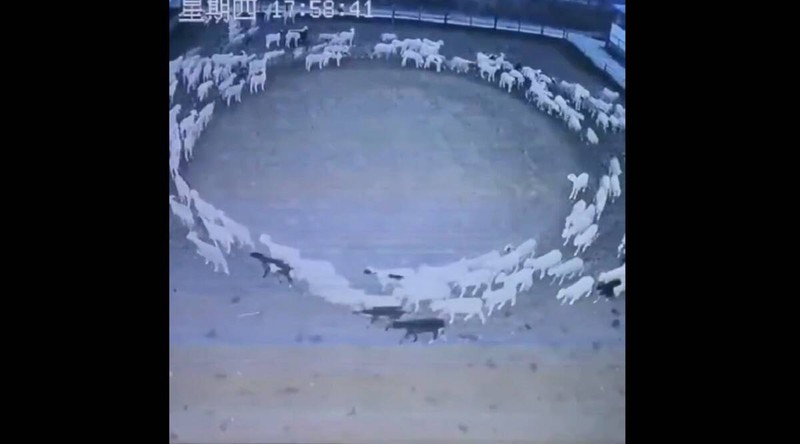 Weather of Arabia - Surveillance cameras documented a strange phenomenon of a flock of sheep in Inner Mongolia, northern China, which began to walk in a circular pattern and continued to rotate non-stop for 12 days, which caused fear and spread rumors about the reason for that behavior.

The great sheep mystery! Hundreds of sheep walk in a circle for over 10 days in N China's Inner Mongolia. The sheep are healthy and the reason for the weird behavior is still a mystery. pic.twitter.com/8Jg7yOPmGK

内蒙古，养殖场羊群连续多日原地转圈，主人诧异：到底是咋回事呢？Inner Mongolia, the sheep in the farm have been circling in place for many days. The owner is surprised: What's going on? pic.twitter.com/GDV3LyGgga

Sheep are known to mimic the behaviors of their flock mates, due to their social instinct, which tells them to follow the animal in front of them to fend off predators and protect group members, but what is strange is the herd's committed movement for such a long period.

In the general behavior of sheep, they usually walk behind a ram leading the herd, which appears to have prestige with its horns and thick wool, and ringing bells are hung around its neck. If the ram walks, the herd follows behind it, believing that it is walking behind its leader.

According to Mrs. Miao, the owner of the farm, only a few sheep behaved this way at first. However, over time, the entire flock began to imitate them, according to the British newspaper Metro.

Miao has 34 pens where she grazes her sheep, but only one flock, in one pen, was behaving strangely, the New York Post reported.

You may also be interested in: "Agriculture" clarifies the "rotating sheep" that appeared in a video clip in Karak Governorate, Jordan

One explanation was offered by Matt Bell, professor at the University of Hartbury and chair of the Department of Agriculture in an interview with Newsweek, in which he said: "Sheep appear to be kept in the pen for extended periods, which may lead to stereotypical behaviour, such as frequent turning around in frustration." "From being confined to the barn and having limited movement options. Not good at all. Then, because the sheep are a flock, they unite or join their friends, and then the other sheep join."

Other experts have linked this behavior to listeriosis, a bacterial disease also known as "rotating disease". The bacteria can infect sheep through soil, food and feces. Other symptoms include loss of appetite, depression, and poor coordination.

Although listeriosis can cause circulating in animals, recovery is uncommon and the effects of the disease wear off quickly. Since the disease usually leads to death within two days, the disease is unlikely to be the cause of sheep running for so long, Newsweek reports.

Among the explanations that circulated about the offspring of sheep circling for several days is that the sheep are trying to warn people of something, or that they sense a change in the Earth's magnetic field, but despite the rumors and possible explanations, the sure reason for the sheep's rotation around itself remains mysterious despite attempts by specialists to explain This phenomenon is frightening and mysterious.