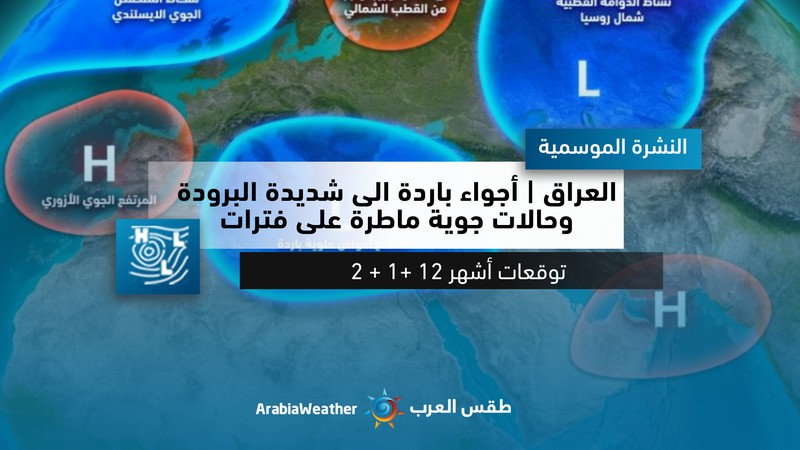 Arab Weather - Arabia Weather presents you with the expected seasonal weather forecast during the fall season (months 1-1-2 ... December, January and February) for the year 2023/2022 (November 2022 issue)

The issuance of these forecasts depends on studying the behavior of temperature and atmospheric pressure in the northern hemisphere, including the atmosphere and large water bodies, and merging those forecasts with global monitoring centers, to come out with the highest possible accuracy of forecasts.

Arab weather experts in the Scientific Research and Development Department developed scientific methods that are considered the first of their kind in the Arab world and the world, as they rely on artificial intelligence in forecasts for the coming months, by developing complex mathematical algorithms and equations to detect atmospheric behavior and correct long-range weather forecasts.

The general situation and the most prominent expected weather phenomena 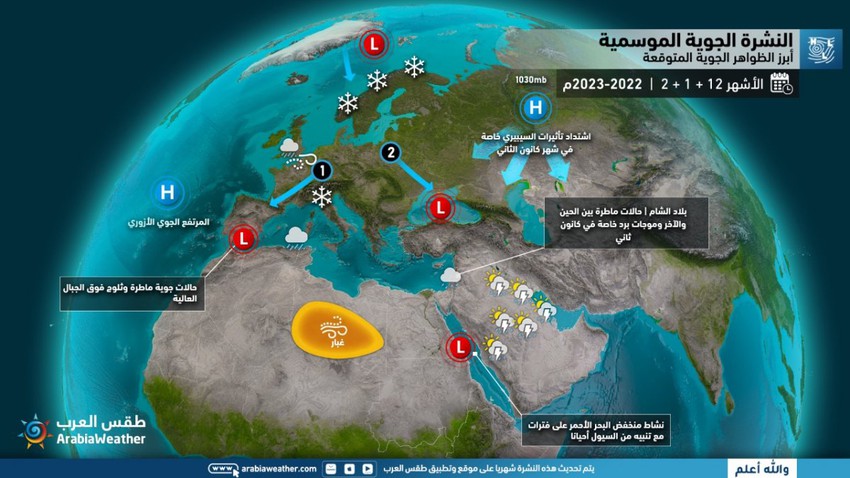 The month was described by the rise in pressure over parts of the Arctic and the British Isles, coinciding with the activity of the Russian vortex to the east, which leads to the rush of cold air masses to the south more than usual and gradually during this month over the western and eastern Mediterranean and Iran, and as a result, Temperatures are dropping and the weather is gradually getting colder in most regions ... Details are available through the paid package on the Arab Weather website and application from here

Temperature: Significantly/clearly cooler than usual with a warning of frost formation on some stable nights

Description of the month Atmospheric pressure is expected to decrease over important areas of the Arctic and North Atlantic Ocean, which allows a larger rush of cold air masses towards the east and south of the European continent, including the eastern Mediterranean, Iran and northern Arabia, and some stable nights permeate the extension of the Siberian High Towards ... Details are available through the paid package on the Arab Weather website and application from here

Temperature: about average in most areas.

Description of the month It is expected that the general distribution of air masses will continue in a manner similar to the month of January, so the atmosphere remains unstable, especially in the details available through the paid package on the Arab Weather website and application from here

What is the difference between seasonal and daily newsletters and what are their benefits?

In contrast to the daily weather bulletin, these bulletins focus on listing the general weather during a month, as the aim is to know the deviation of the amounts of rain and temperatures from their general rates. Many meteorologists in the world are busy trying to solve the puzzle of making accurate seasonal forecasts by conducting many researches in this regard, in which the Arab Weather team participates in part.

The intended benefit of the quarterly bulletins lies in assisting various sectors in early planning for the fall and winter seasons alike, especially the agricultural sector, which bases its agricultural plans on these indicators, which sometimes help in making profits by exploiting this information, in addition to many other sectors that You benefit from these expectations, such as the commercial sectors, the apparel sector, the energy sector, and others.

Note: It is strictly forbidden to transfer this information, data and weather forecast and publish it on social media and others and / or dispose of it in any way without obtaining the prior and written approval of Arabia Weather, under penalty of legal liability.