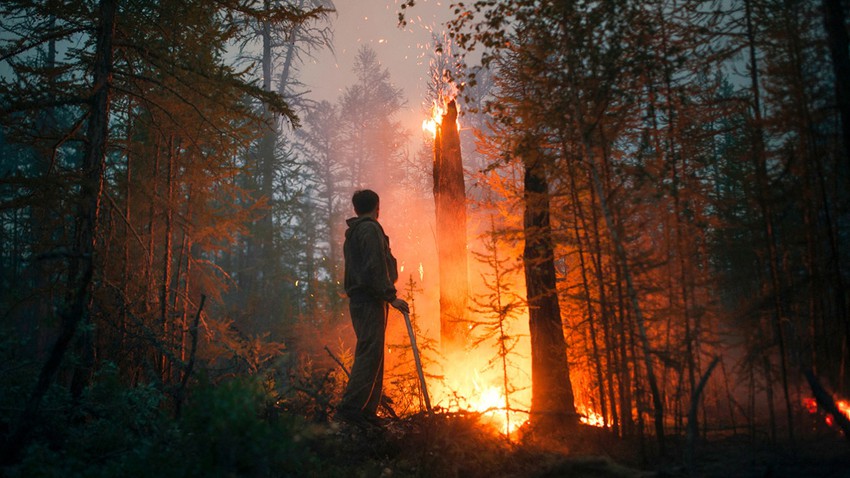 Weather of Arabia - It was a rare sight in the coldest city in the world , where vast forests burned around the Siberian city of Yakutsk in northern Russia, which freezing temperatures in winter gave it the title of the coldest inhabited city on earth, and here is the region witnessing massive fires that covered the city sky with dark foggy smoke. .

The Yakutia region (which includes the city of Yakutsk), which borders the Arctic Ocean, has seen an average annual temperature rise of 3°C since the beginning of the 20th century - two degrees more than the average temperature of the planet - and this summer has seen several Days with a record temperature of 39 degrees Celsius.

While it is difficult to link individual fires directly to climate change, global warming increases the likelihood of fires because stronger and longer droughts create ideal fire conditions.

With a drought this summer in Yakutia not seen in 150 years, forest fires that have burned more than 1.5 million hectares of swampy taiga forests swept the region, which beat all records, according to experts.

With the annual wildfire season in Siberia raging for more than a month, officials scrambled to calm the fires, sending the military to sow clouds to produce rain.

But in Yakutia - a region of less than a million people - the bulk of the work has fallen to thousands of local firefighters and volunteers, working with meager resources and a low budget.

This means that dozens of fires have been left unchecked, with priority given to protecting residential areas.

Russia has seen "uncharacteristic fires" this season, from Siberia to the Urals and its northwestern Karelia region, said Grigory Koksin, head of the country's Greenpeace forest fire unit.