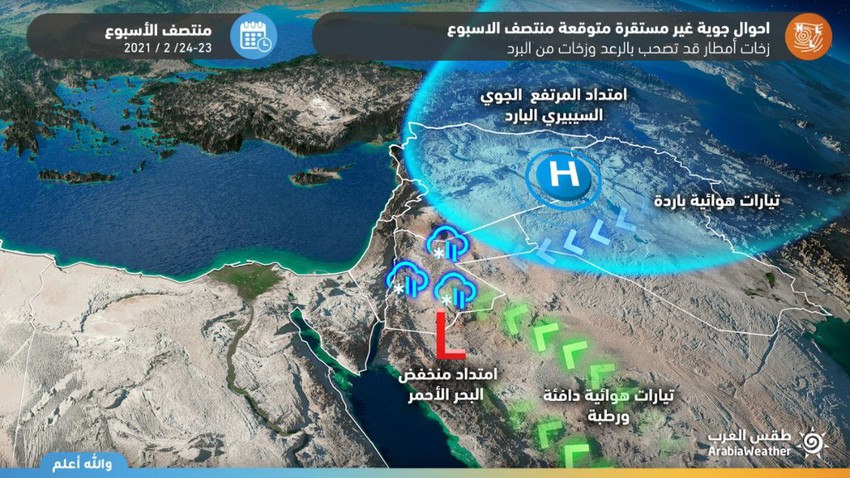 ArabiaWeather - Eng. Nasser Haddad - God willing, it is expected that the Kingdom will be affected by unstable weather conditions in random areas, especially on Tuesday and Wednesday, resulting in the multiplication of clouds and showers of rain that may be accompanied by thunder and hail at times.

The chances of rain begin to improve with the hours of Monday afternoon and evening, in limited areas of the Kingdom, so that the amount of rain gradually widens on Tuesday, and showers of rain fall in different regions of the Kingdom, including the southern and eastern Badia regions as well, and the rains are sometimes thunderous and accompanied by hail showers in some areas .

On Wednesday, it is expected that the chances of rain will be concentrated in parts of the south and east of the Kingdom, especially the Badia regions, where heavy showers are not excluded sometimes.

In details, it is expected that the Red Sea depression will extend accompanied by southern and humid air currents, with the continuation of the remnants of the cold air mass accompanying the extension of the so-called Siberian air rise, as it pushes cold to very cold eastern winds across the Jordan Badia towards the eastern parts of the northern and central regions, in conjunction with the eruption of A cold depression in the high air layers across the eastern Mediterranean.

This means, the Kingdom was affected by a state of atmospheric instability in the middle of the week, and the multiplication of clouds, precipitation and hail, God willing.

This situation is particularly distinguished from other cases of atmospheric instability, by the presence of cold and semi-dry northeasterly winds in the lower atmosphere and close to the surface of the earth, in conjunction with the presence of medium clouds laden with precipitation, and such weather conditions that would greatly increase In the cold weather, especially in the Badia regions and some other limited areas, it is not excluded that some cold showers will be accompanied by snow showers as well, but it is difficult to go into such details and define the geographical areas and their precise time, due to the high margin of error significantly from now .