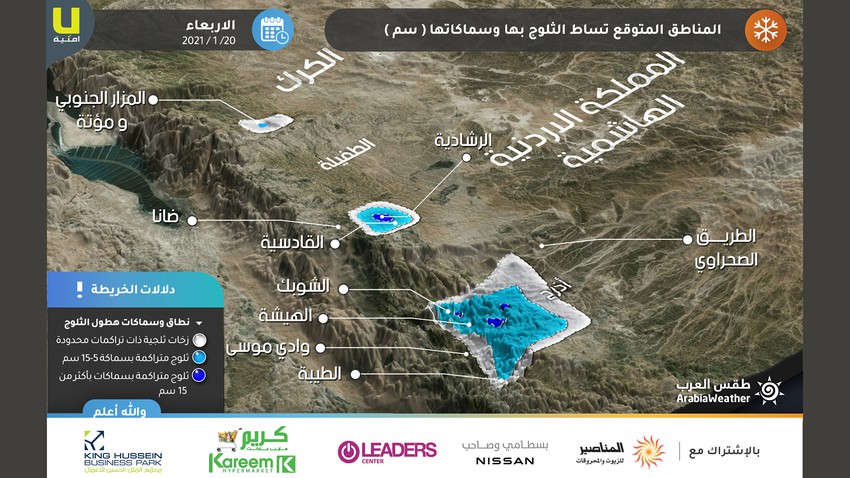 Arab Weather - A short time ago, the Weather Forecast Department at the Arab Weather Center issued a report explaining the areas covered by the forecasts of snowfall on Wednesday, and the report stated that the third-degree air depression is deepening its impact, which is associated with the extremely cold and polar air mass, and a significant decrease The temperatures during the day on Wednesday are 6-8 degrees Celsius below their usual levels for this time of year.

The weather is cold in most areas and very cold over the high mountainous heights, and often cloudy with rain, God willing, at intervals in various regions of the Kingdom accompanied by the occurrence of thunder and showers of hail, as well as snow mixed with rain falling over the mountain heights sometimes.

The report pointed out that the areas expected to snow and accumulate are the high mountain heights that are more than 1,200 meters above sea level.

The report added that it is not excluded that the snowfall will be intense at intervals over the high Tafila Mountains (the Rashadiyah and Qadisiyah heights).

As for the winds, they are westerly active, with strong gusts, especially in the east of the Kingdom.

The report included recommendations that include:

The air depression is moving rapidly towards the east, so that the air efficiency gradually weakens with the evening hours, while it is expected that the polar winds will continue to flow towards the Kingdom, causing the Kingdom to be affected by a wave of ice and the temperature to drop to zero degrees.

Where there is a sharp drop in temperatures, and the weather turns to become extremely cold in many regions, with the opportunity to remain ready for showers of snow over the high mountain heights, especially the south, in the early hours of the night.

And later during the night, and gradually, a large-scale snow wave is expected in large parts of the Kingdom.

The report added that there are recommendations that include: