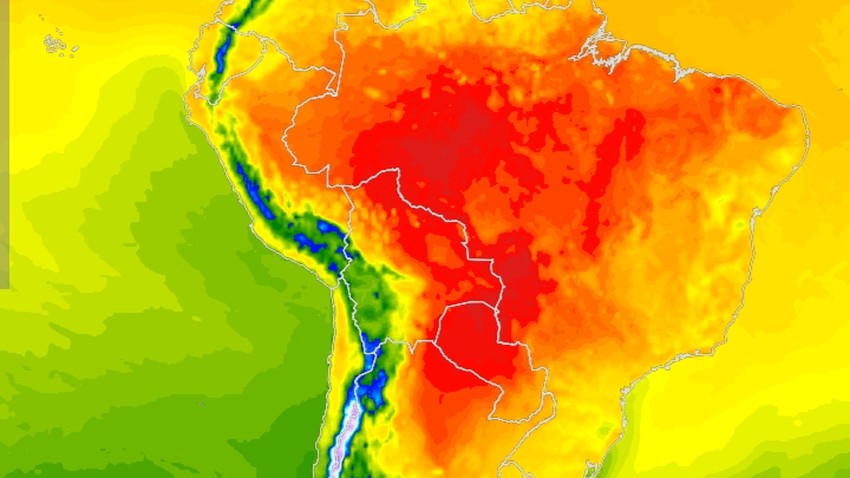 Arab weather - Countries in South America are still under the influence of a heat wave, during which Paraguay recorded the highest temperatures for the month of July in its climatic record, as temperatures reached nearly 39.1 degrees Celsius, and it is expected that the effect of the heat wave will continue during the coming days, accompanied by very high temperatures .the details

The heat wave will continue in the coming days

The effect of the heat wave continues on Brazil today, Tuesday, and on Wednesday and Thursday, but it intensifies and expands its impact to include eastern Peru, large areas from Bolivia to all regions of Paraguay and northern Argentina, accompanied by hot to very hot weather, where the maximum temperatures are between the early and end of the thirties, and reach To forty levels in some regions, especially in Brazil and Paraguay.

The effect of the heat wave includes parts of Ecuador, Colombia and Venezuela, but with less intensity than the rest of the surrounding countries.

The heat wave is retreating from northern Argentina and Paraguay Thursday and the end of the week, and a wave of rain is expected

The effect of the heat wave is gradually receding from northern Argentina and Paraguay as a result of the progress of cold winds from southern Argentina, where the cold winds coincide with the remnants of the hot air mass that was previously affected, which leads to the formation of unstable and strong weather conditions, resulting in heavy thunder rain, which is accompanied by showers From hail in large sizes, and at that time, it is feared that torrential rains will form, the water level will rise on the roads, and the occurrence of water gatherings.

The impact of the heat wave coincides with the countries, central and northern parts of South America, with additional countries from the American continent, specifically the southern one, being affected by very cold and polar air masses, especially southern Argentina, so that heavy snow falls in those areas, in addition to the western mountain ranges of the rest of the countries.