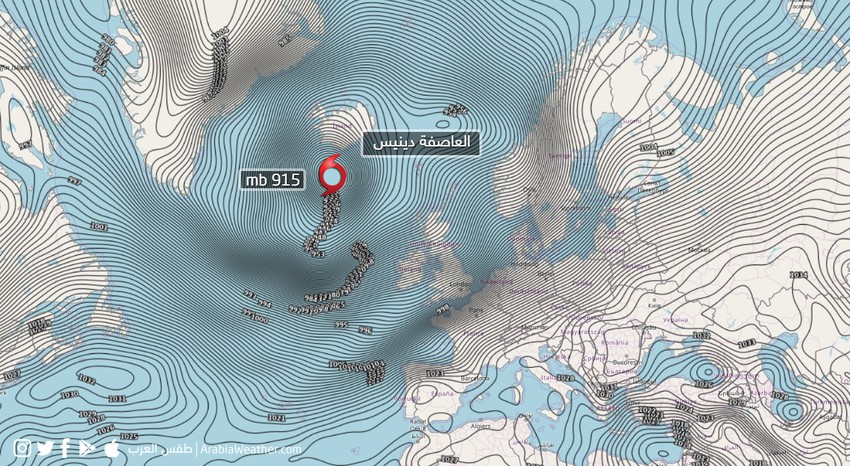 Weather of Arabia - Dennis storm officially ranked second most powerful storm in the North Atlantic since the start of climate records, and the atmospheric pressure in the center of the storm reached 915 millibars and thus the storm Dennis is only 2 millibars higher than the strongest storm in the North Atlantic that was recorded on January 11 1993, at which the air pressure was recorded at the center of 913 millibars, and the storm Dennis surpassed the storm that was occupying the second position, which was recorded on December 15, 1985, with a air pressure value of 920 millibars.

Low Bombogenesis was the beginning of Storm Dennis

The beginning of the formation of the storm started from the coast of eastern Canada when a very cold polar air mass rushed towards the waters of the western Atlantic in conjunction with the presence of a relatively warm and humid air mass originating in the tropics, where there was the first nucleus to form a low air velocity, which turned into a storm rapidly as it moved north Over the waters of the Atlantic Ocean.

The eruption of polar masses towards warm water is the first spark for a rapid start of the collapse of the atmospheric pressure values and the intensification of storms, and the geographical location and topography of the first convergence zone between the polar mass and warm water plays an essential role in determining the strength and size of the storm, so we find the strongest and largest storms of Bombogenesis is formed over the waters of the oceans near the "northern or southern" poles, and the same type of storms are formed over the waters of the Mediterranean during the autumn season, with the cold northern winds starting to blow over the hot Mediterranean waters after the summer.

How did Storm Dennis affect Europe?

Since Dennis is considered an exceptional storm for Europe, only the airlines that cross the northern Atlantic Ocean and our flights from Europe towards North America have had to change their routes away from the storm.

The storm also led to the closure of many airports in Britain, including the airports of Edinburgh and Glasgow and Erbak in the movement of trains throughout the United Kingdom.

The speed of the wind gusts accompanied by the storm, Dennis, reached 200 km per hour, which led to the fall of trees, cut off roads and electric current in many parts of southwestern Ireland and Ireland.

Corona gives the earth a truce from humans

Giant pink moon `the largest for this year` appears tonight ... What is it and where did the name come from?

What is the origin of the word `Quarantine` and what does it mean?