Storm `Eunice` .. At least 12 people were killed in the worst storm to hit Britain and Western Europe 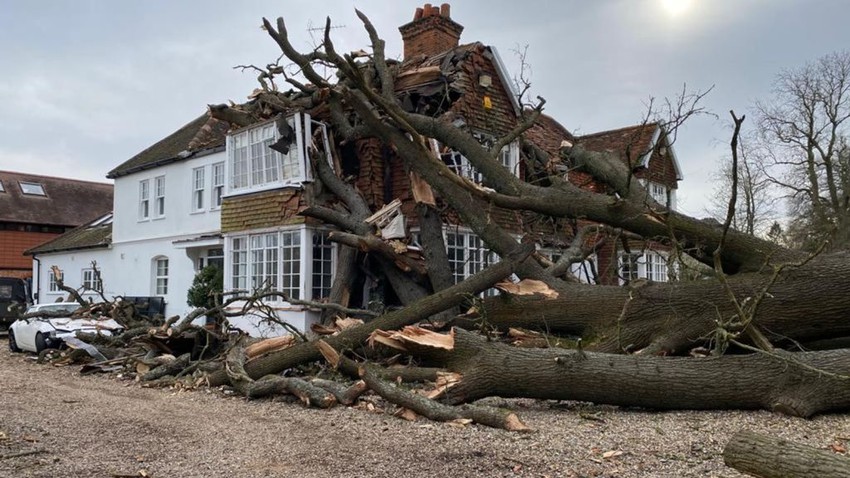 Weather of Arabia - In one of the most destructive storms that the region has witnessed in years, at least 12 people were killed (most of them due to falling trees) in Ireland, Britain, Belgium, the Netherlands and Germany, where high winds caused many trees to fall and caused extensive damage to buildings and properties in many of countries.

Friday's (February 18) storm, which the British and Irish weather services called "Eunice", and in Germany, "Zeinab", was the second to hit the region within a week.

Gusts of 122 mph (196 kph) were provisionally recorded on Friday on the Isle of Wight and, if confirmed, would be the highest wind speed ever in England.

The storm has left at least three people dead in Germany, including a man who fell while trying to repair a damaged roof and a driver whose car crashed into a tree that fell across a road. And in the Netherlands, where four people were killed on Friday by Storm Eunice, which caused damage to most of the country, and two people were killed in the Polish city of Krakow, where strong winds caused the collapse of a construction crane.

A house in Brentwood was badly damaged after high winds accompanying Storm Eunice brought down a large 400-year-old tree, without harming the residents of the house.

Transport and trains were disrupted in most of the United Kingdom and Germany, and winds toppled a church tower in Wales, southwest England, and strong winds ripped the roof of the famous O2 Arena in London, and about 1,000 people were evacuated from the place. It also left debris from trees and damaged buildings in many countries, in addition to cutting off power to thousands of homes.

Not to mention the effect of strong winds on planes, as planes were left struggling to land at Heathrow, one even diverted to Paris after failing to land on the second attempt.

University of Reading professor of climatology Richard Allan said that while storms like Eunice are certain to strike once every decade in the British Isles in the future, there is no convincing evidence that they will become more frequent or stronger in terms of wind speeds.

"But with more torrential rains, rising sea levels and human activity continuing to warm the planet, floods from coastal storms and prolonged flooding will be even worse when these rare explosive storms hit us in a warmer world."