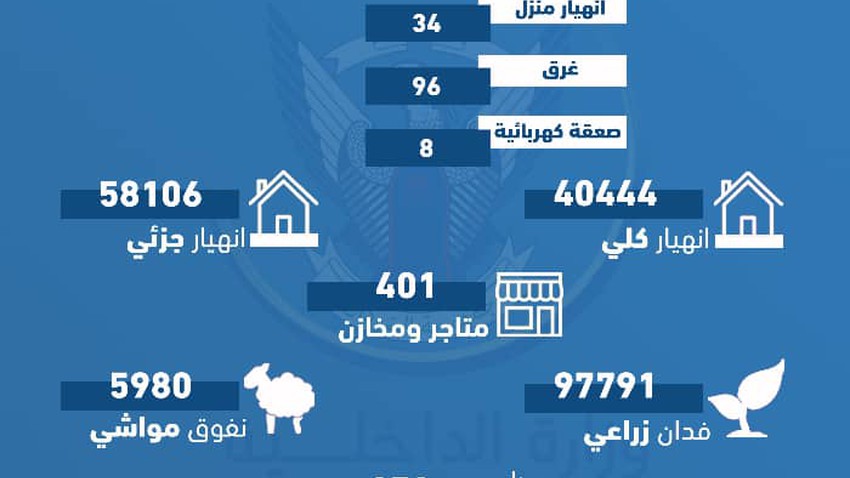 Arab Weather - The Ministry of Interior in Sudan issued a new update on the latest developments and developments in the wave of floods in the country, in which it announced that the number of victims had risen to 138, after 10 new deaths were recorded.

The ministry stated in the statement, which was published on the social networking site "Twitter", that 96 people died by drowning in rainwater , while 38 others died under the rubble of homes that collapsed on their inhabitants without prior warning, in addition to 8 deaths due to electric shocks. The injured, 54 injured.

The collapse of nearly 100 thousand homes

The Ministry of Interior in Sudan also announced the collapse of nearly 100,000 houses, 40,444 of which had completely collapsed, while 58,106 houses partially collapsed, 401 shops and stores were damaged, 97,791 acres of agricultural land, 5,980 heads of livestock died, and 177 facilities were damaged. Educational facilities, 39 health facilities, and 36 facilities in the service sector.

The latest reports of the Flood Committee indicate a significant decrease in the levels of the Nile water, especially the quantities of water coming from the Sudanese-Ethiopian borders.

The World Bank announced its donation of $ 2 million to the Sudanese Ministry of Irrigation and Water Resources to strengthen the systems for forecasting rains and early warning of the Nile floods, and the bank revealed its intention to send a technical team to Khartoum to find out the actual needs and how to implement the support as soon as possible.