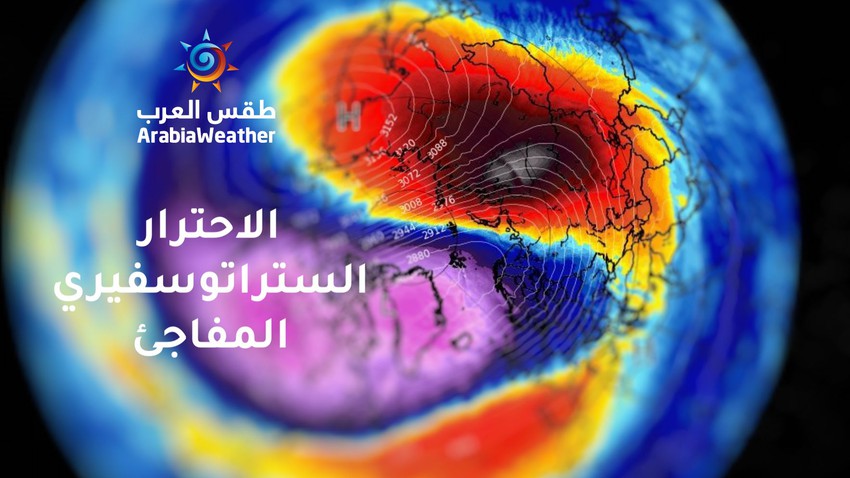 Weather of Arabia - Most global climate monitoring centers monitor the occurrence of what is called Sudden Stratospheric Warming, which occurs over the Arctic Circle at an altitude of about 30 km above the earth's surface, due to its great impact on changing the prevailing weather patterns in winter In the northern hemisphere, what is this phenomenon? What is its impact on the earth's climate?

Definition of the stratosphere

The stratosphere is one of the layers of the upper atmosphere, and it is the second layer of the atmosphere near the surface of the earth after the troposphere, as it extends from 18 - 50 km above the surface of the earth, and the air in it is dry and devoid of water vapor and clouds, and the stratosphere is devoid of air currents Upward and downward, but two types of air currents flow at its base, moving horizontally around most of the globe, and this layer is characterized by coldness and its temperature is almost constant around -5 ° C, but the temperature may increase over the poles because the layer is thinner there, and less above the equator .

(Image showing the stratosphere between the layers of the atmosphere, and what each layer contains)

How does the sudden stratospheric warming occur

Can the occurrence of sudden stratospheric warming be predicted?

Usually it takes a sudden warming in the stratosphere a few weeks to affect the weather, and the effects can be delayed to the next month, but now it is possible to predict the sudden temperature rise in the stratosphere about a week ago, through the use of satellites and some other signs, sometimes the flow disruption occurs The usual western for jet currents due to natural weather patterns, or disturbances in the lower part of the atmosphere, such as the presence of a large area of high atmospheric pressure in the northern hemisphere, which causes this to fluctuate the jet stream and break these waves or vibrations just like the breaking of waves on the beach, Then it could be strong enough to weaken or even reverse the westerly winds and swing them to the east, then the stratosphere is compressed and heated up, and warming occurs.

The effect of sudden stratospheric warming

Despite the occurrence of the sudden stratospheric warming phenomenon at high altitudes, its impact reaches heights close to the earth's surface, especially in those layers that control the weather and the shape of weather patterns, so that it results in the escape of currents and polar masses away from their original home (which is the Arctic ), To be distributed randomly in the northern hemisphere regions.

The beginning of the effects of sudden stratospheric warming is on the so-called polar vortex, and the polar vortex ( Polar Vortex ) is a region of low atmospheric pressure in which cold air circulates, and the polar vortex is coherent in its natural position above the North Pole, but arms branch out on several regions, so that it is responsible after God willing, the development of deep depressions during the winters, and they are the source of the winter depressions, with both rainy and snowy parts, on the continents and regions of the North of the Earth.

(An image showing the polar vortex in the case of stability, and if the arms are extended)

What happens as a result of the sudden stratospheric warming sometimes directly affects the polar vortex, and may lead to its splitting in two depending on where this warming occurs over the Arctic Circle, and in the winter of this year (2020/2021) it is believed that the sudden stratospheric warming will be strong enough to fission This polar vortex is divided into two parts, so that a large accumulation of extreme polar cold occurs in the northwest of the continent of Asia and the whole of the European continent, so that a strong polar current flows to the west of the European continent before it merges with other intense polar currents in the east of the European continent and accumulates there for a period of time.

After this fission, these masses settle in certain regions and habitats after several weeks or so, determining the shape of weather patterns for the remainder of the winter until its end, so that the concerned areas become exposed to storms and rain depressions, and other areas that are stable and warm.

The accuracy of global computer weather forecast models for simulating the movement of air masses in the atmosphere is affected during the period in which the sudden stratospheric warming occurs due to the consequent consequences and the randomness of the distribution of the polar air, but these models return to the usual accuracy when the air masses settle in specific locations And talking more here, especially about the computer weather forecast models for the medium and long terms.

The effects of this phenomenon vary from year to year according to other weather elements and indicators that are prevalent in the world at the time of this phenomenon, such as the temperatures of water bodies in the northern hemisphere or regions of low air and the patterns prevailing at the time, but weather experts always try to speculate how the sudden stratospheric warming will affect Depending on the above, weather patterns after they occur, and these predictions may or may not be correct.

Despite the climatic and statistical effect of this phenomenon by accumulating polar coldness in the western European continent, and sometimes eastern Canada, reaching the eastern United States of America, but this time it seems that the accumulation of polar cold will eventually occur in the eastern European continent, according to what the special computer modeling senses By simulating the atmosphere, so the Arab world will be directly affected by the consequences of this phenomenon.

As a result, it is expected that the distribution of air masses in the first days following the occurrence of this phenomenon (i.e. the first two weeks of January 2021) will lead to the successive effects of the regions of northwestern Africa (the Maghreb) of the cold and rainy polar depressions. And glaciers, in addition to the western part of the European continent, which is expected to witness many of its capitals, such as Paris, London and even Madrid in the south, high opportunities for snowfall. This corresponds to the flow of warm currents to the western parts of the Arab East, which include the Levant, including Jordan and Egypt in addition to To Libya, and this is according to the expectation of the "Arab Weather" Center that a dry and stable atmosphere, and perhaps warm at times is unusually warm in these countries in the first part of January of 2021, and at the same time and as a consequence of the same situation Cold currents flow from the north of the Asian continent to the Arabian Gulf and central and southern Arabia, causing a significant drop in temperatures below the usual rates in those areas, and it may reach close to zero degrees in the high mountains of the Sultanate of Oman.

After that, and after the consequences of this fission of the polar vortex were stabilized, it is believed that the polar air with multiple sources will accumulate for a period of time in the eastern parts of the European continent, and even some computer modeling went to predict the center of the polar vortex there, which will have a direct impact at the time on the Arab East Where the air systems are expected to change and reflect, perhaps literally, so that the regions of the Levant, the eastern Mediterranean and the central, northern and western parts of the Arabian Peninsula are exposed to rainy depressions, and perhaps some of them are cold enough to cause snowfalls in some areas, while an increase in Temperatures and weather is relatively stable in the Maghreb, and temperatures are relatively high in southeastern Arabia.

But due to the presence of other factors that are involved in controlling the formulation of weather patterns, it is also expected that the shape of the prevailing weather pattern in the last period of the month will be complex, represented by a large accumulation of polar cold in the east of the European continent with a strong polar vortex there, but the atmospheric pattern may lack the presence Strong enough air heights located to the west of the polar vortex, to be able to push part of these cold masses in the east of the European continent to the Arab East, which leads us to expect the prevalence of a natural winter atmosphere in the fourth week of the month.

More details about the expected weather conditions can be followed in detail for the month of January 2021 through the monthly bulletin issued this morning from ArabiaWeather: