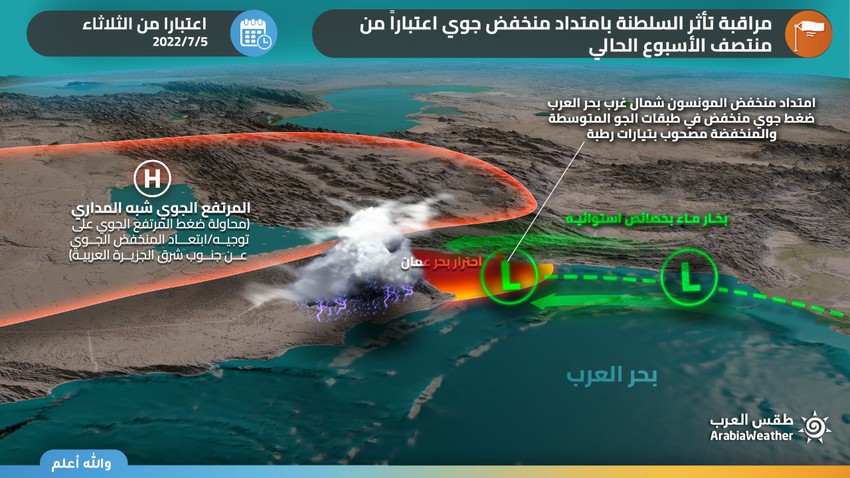 Arab Weather - The latest weather maps received from global centers and others developed from Arab weather internally indicate that the Sultanate is expected to be affected by a low air extension coming from the Indian subcontinent that leads to the emergence of unstable weather conditions in many parts of the Sultanate, starting from the middle of this week God willing.

In the details, it is expected that the chances of cumulus formations will continue on the Hajar Mountains on Monday, accompanied by rainfall of varying intensity, sometimes thunderstorms and accompanied by active downward winds, and extending with the afternoon and evening hours of the desert areas, coinciding with the activity of autumn clouds and mist fall on the coasts and mountains of Dhofar.

According to the analytical data in the "Arab Weather", it is expected that the Sultanate will be affected on Tuesday by weather disturbances resulting from the extension of an air depression from the east and the progress of the seasonal belt to meet the winds to the south of the Arabian Peninsula. Strong thunderstorms along the Al Hajar mountain range, God willing, which in turn will lead to heavy thunderstorms of rain, which may arise and torrents flow in the valleys. Some medium and high clouds are also flowing, interspersed with some cumulus clouds resulting from the impact of the depression on parts of North Al Sharqiah, South Al Sharqiah, Muscat and Al Wusta, accompanied by scattered showers of rain that are sometimes thundery and accompanied by the activity of downward winds in some areas. 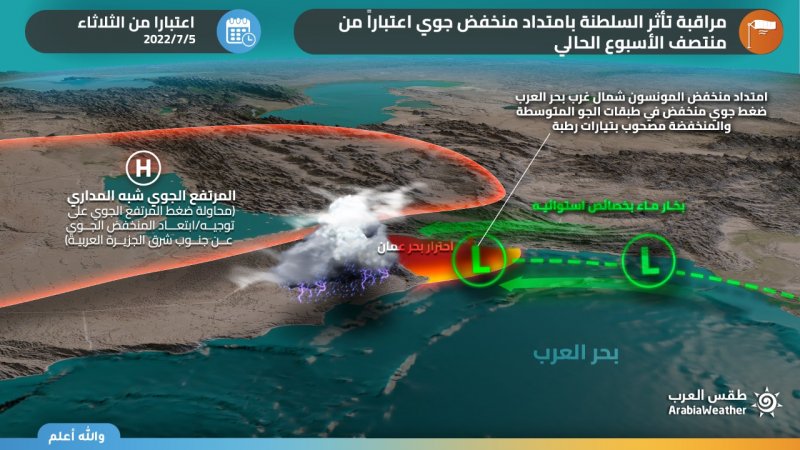 All of the above is within the context of the latest forecasts of the weather readings issued by the Arab Weather Center, and updates will be launched that will highlight more details in an ascending manner as needed, God willing.