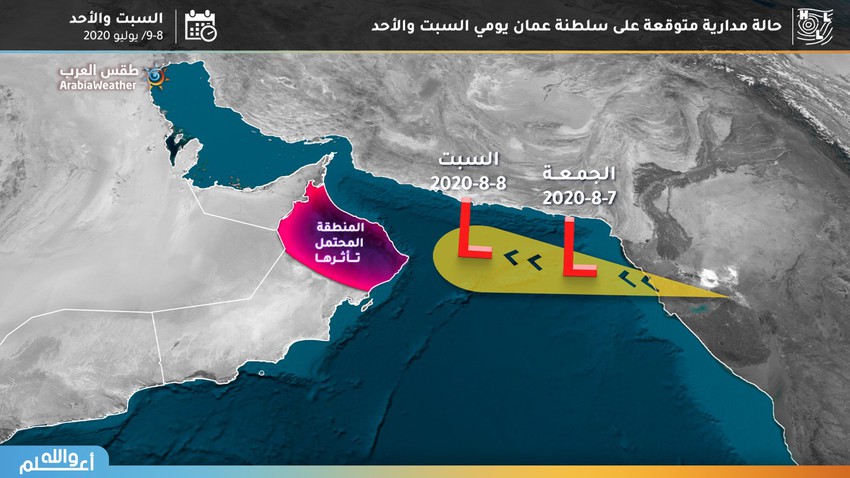 Arab Weather - Sinan Khalaf - The weather forecast staff in Arab weather monitors the rapid and remarkable movement and development of the tropical state that is still concentrated to the east of the Arabian Sea, and which is expected to move quickly to the west to affect the Sultanate of Oman directly, starting from Saturday, bringing with it thunderstorms Exuberant.

Rainfall amounts may exceed 100 mm in some areas

Weather forecasts indicate that the clouds that will flow to the Sultanate from the Arabian Sea will carry with them large amounts of rain, which may reach a barrier of 100 mm per 24 hours in some areas, according to what the Omani Meteorological Department said in its official statement.

Areas most affected by the tropical condition

The authority also expected that the effects of the tropical situation would be direct on the governorates of Muscat, South Al Sharqiyah, North Al Sharqiyah, Al Dakhiliyah , South Al Batinah, North Al Batinah, Al Dhahirah, Al Buraimi and Al Wusta . Their climax will be on Saturday , and, God willing, will be accompanied by moderate and heavy rains falling in these areas, sometimes thunderstorms lead to the flow of valleys And the reefs are accompanied by active descending winds that lead to the rise of dust and dust in the desert and open areas until Monday, August 10, 2020.

It is possible that the sea will be rough on all the coasts of the Sultanate and its maximum height ranges from (3-5) meters, with the possibility of the sea water extending over the low coastal areas, coinciding with times of high tide.

The authority called on citizens and residents to take caution and caution during the rains and flow of valleys, and to ensure the state of the sea before going to it, and to follow up on the weather forecasts issued by it.

Saudi Arabia | Dust and dust raised on Riyadh on Monday

Saudi Arabia: 593 new cases of Coronavirus and 1,203 recoveries were recorded during the past 24 hours