Sultanate of Oman | Intensification of heavy rain and thunderstorms in many areas Thursday, warning of torrential rains 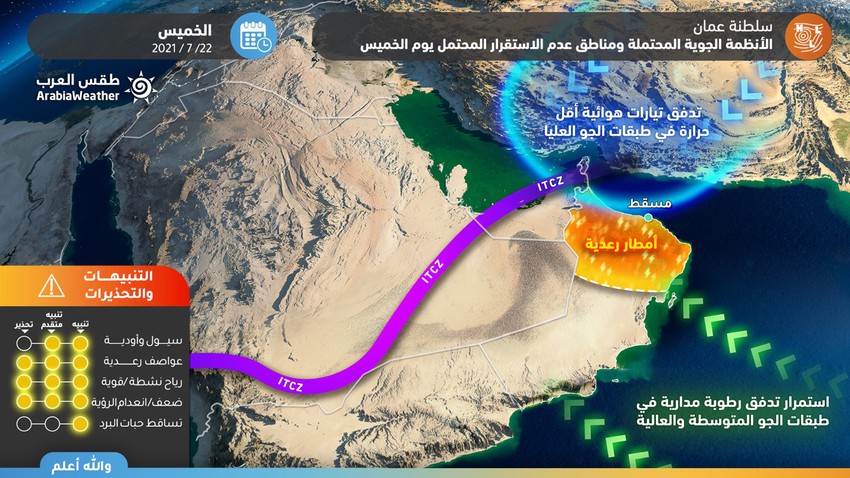 Arab Weather - The data of the numerical forecast models operating in the Arab weather indicates an expected intensification in the intensity and patchiness of cumulus clouds on Thursday in large parts of northern Oman, following the extension of an air groove towards the Sultanate’s atmosphere, coinciding with the residual tropical moisture in the region, which intensifies the intensity The patch of cumulus clouds over large parts of the Hajar Mountains and the surrounding areas.

Intensity of rain and areas covered by Thursday

In the details, the rain area is expected to expand again on Thursday, to include large areas of the north of the Sultanate, as with the rush of less hot air currents in the upper layers of the atmosphere, a large thermal difference arises between the layers of the atmosphere, which works to create strong and dense clouds, and currents activate. Thermal convection that supplies thunderclouds with the energy needed for their development, which increases the chances of heavy hail showers, especially over mountainous heights. 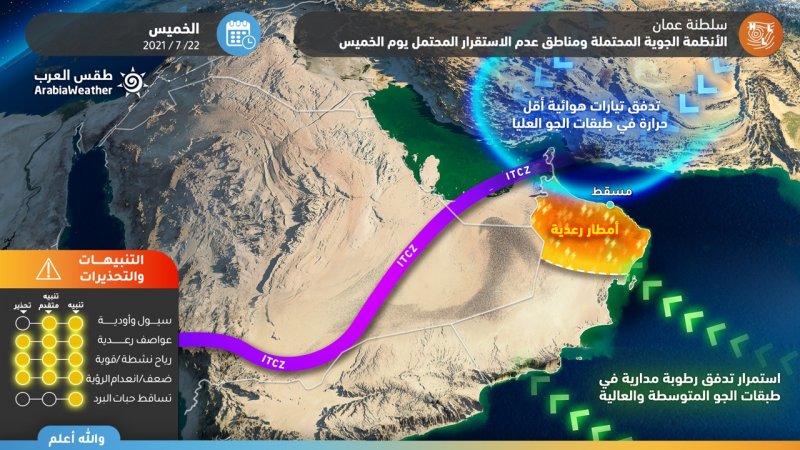 According to the weather forecast department specialized in meteorological conditions, it is expected that thunder clouds will intensify at different heights during the noon hours in conjunction with the presence of high heat load, which leads to thunder showers of varying intensity on the Hajar Mountains, and towards the evening and night hours, these clouds extend to include neighboring areas. , does not rule out an extension of some of these clouds towards parts of the coast of Oman, the rain and are sometimes thunderstorms and varying intensity is generally accompanied by showers of cold and activity of the winds descending which give rise to dust waves in some areas, and in such a climate , rising opportunities constitute the floods and rising water levels on the roads, especially With the saturation of the soil with rain water.