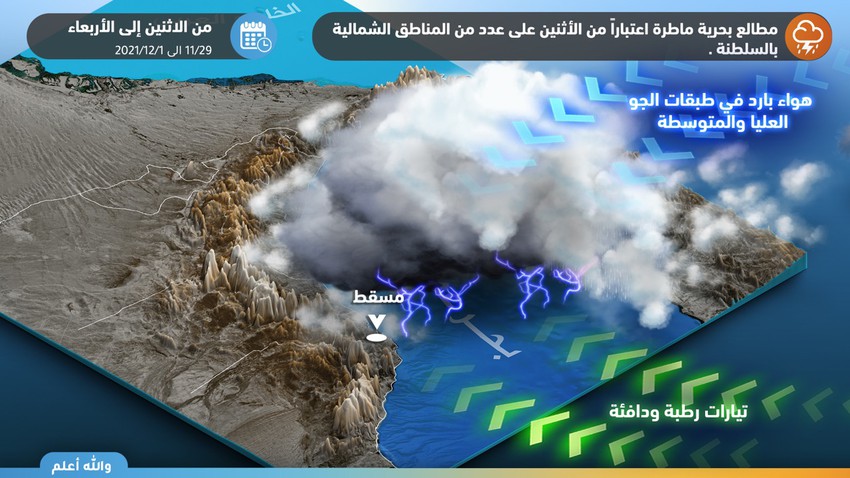 Weather of Arabia - With the impact of the upcoming rainy situation on the Sultanate, an activity of marine sights is expected on many coastal areas overlooking the Sea of Oman, starting from Monday, and intensifying on Tuesday, God willing, to include most of the coastal areas of the Sea of Oman, and following are the details:

If you are browsing from your phone, you can download the Arab Weather application, which provides accurate weather forecasts for thousands of regions in the Sultanate, click here.

Marine sightings, including most of the coastal areas overlooking the Sea of Oman, as of Monday

How are sea sights formed in the Sea of Oman to affect coastal areas?

In the details, sea rises are formed from the Sea of Oman to affect several parts of its coasts, when cold air coming from the north meets the cold upper basin, and at the same time warm and humid air currents rush from the east, so cold air meets warm moist air in several areas In the warm sea of Oman, when sea rises occur, clouds form and grow vertically and quickly, and become thunderclouds, which begin to fall over the sea, and move to coastal areas. 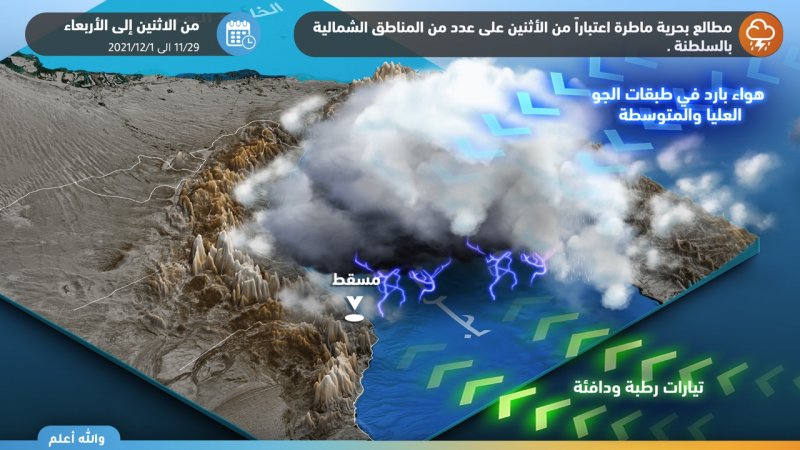 Marine sightings (coming from the sea) enter the coastal areas in the form of dark-coloured cumulus thunder clouds, accompanied by thunderstorms that are heavy in certain areas and not others, so that there is heavy rainfall in some parts, and in other parts the weather may be clear.

Therefore, expectations vary with regard to the sea sights, and the areas that these sights are expected to move to, which will be covered by rainfall, so that they start with small clouds, then grow and move to the coast, and these sea sights may enter other areas further from the coast.

Sultanate of Oman | Details of the areas covered by the forecast of rain for the Sultanate during the impact of the rainy condition, the Renaissance Canyon

important | Oman Meteorology issues alert No. 1 about active winds, possible dust and sea turbulence at the end of the week