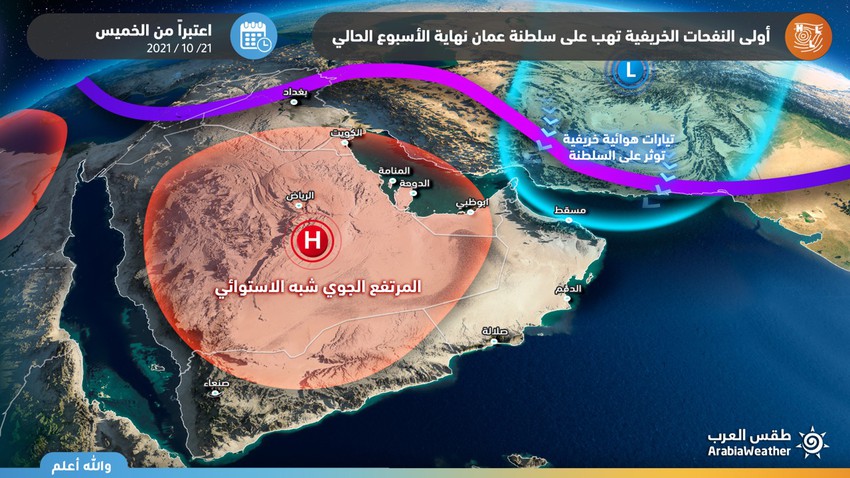 Arab Weather - The Department of Operations and Weather Forecasts in Arab Weather is closely monitoring the outputs of the weather maps, which now indicate that there is a rushing autumn air mass in the north of the Sultanate of Oman, as of Thursday, as a result of which the temperatures drop significantly, as well as the opportunity for some rain to fall in Limited areas of the Sultanate, and here are the details:

In the details, an autumn air mass with temperatures below their averages for this time of year is approaching the north of the Sultanate of Oman as of Thursday, with a remarkable drop in temperatures in most areas, and it continues to drop during the weekend so that the temperatures are in the twenties Celsius in large parts of the Sultanate, and the temperature drops at night, with cold weather prevailing, especially in the tops of the Al Hajar Mountains. 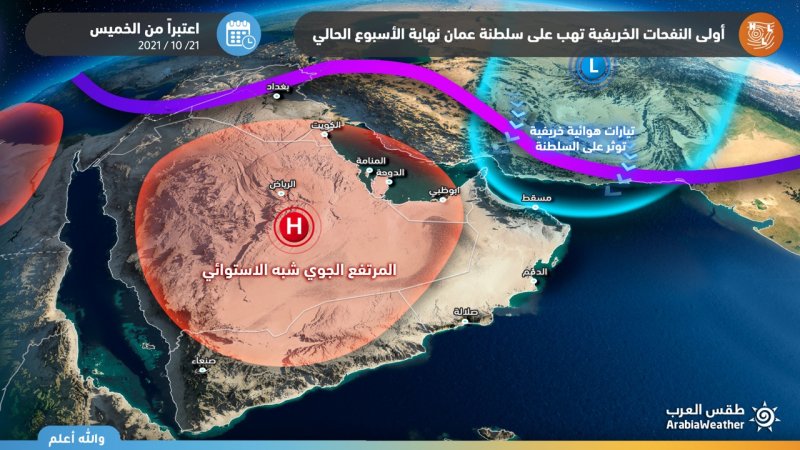 It is expected that some low-altitude clouds will flow over the northern region, accompanied by showers of light to medium intensity in limited areas of northern Oman, especially the coastal ones, in conjunction with the return of opportunities for local formations on parts of the Hajar Mountains so that the opportunity is ripe for thunderstorms of varying intensity.

The Arab Weather Center is monitoring indicators of improved rain chances at the beginning of next week in parts of the northern Sultanate of Oman to include many areas, so Arab Weather invites you to follow up on periodic reports issued on a regular basis.

Arabian Gulf | Variation in temperatures in all countries, and the continued flow of cold winds to northern Saudi Arabia in the coming days. Details

Sultanate of Oman: How long will the active winds and dusty weather last in the Sultanate?